Who watches the Watchmen? For better or worse, me. 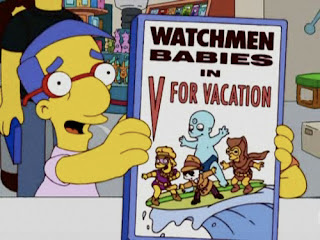 On Friday, a new superhero movie will come out, and there are two things I can guarantee: (1) I will go see it, and (2) I will be disappointed.

The main reason is that the movie in question is Watchmen, based on the most riveting “comic book” ever made. When you have a story that (1) has been named to a slew of “Best Novels Ever” lists (right in there with Moby Dick, et al.); (2) pretty much changed the way people view comic books (they’re now called “graphic novels” and discussed as a serious artistic medium); and (3) has been described by many, including its own author (the brilliant but incredibly pissy Alan Moore), as “unfilmable” – well, chances are something will be lacking in the translation to the big screen.

But there is a deeper reason as well: I just can’t be satisfied with science fiction movies. I want to, I really try to, and I keep going back again and again. But every movie has its alien robot zombie moment that makes me say, “Nope, sorry, you just lost me.” (Speaking of which, to the writers of Lost: more “Others” and intrigue and less time travel before I go all Hurly. I’ve invested too much into this show for you to go all Rambaldi-prophecy-of-the-week on me now, J.J. Abrams!)

Even The Dark Knight failed on this account, although I will admit that Heath Ledger gave one of the creepiest, most psychotic performances I’ve ever seen and damn well deserved that Oscar. But when the Batpod shot out of the Batmobile, even while I was hearing people around me whisper “Cool!” I was thinking: “James Bond has machine guns in his skis.” It was cheesy and I didn’t buy it. (I’m coming around; I was able to stifle my mental gag reflex and enjoy it more the second time. Ditto all the scenes with Two-Face and the terrible "I must be the villain to be the hero" ending that made no sense.)

The best superhero movie so far was last year’s Iron Man, mostly because of Robert Downey, Jr., who managed to be funny/charismatic and vulnerable at the same time. But it also had a lot to do with Jon Favreau keeping the movie very grounded: it was not about a superhero, it was about circumstances that all of us could identify with (war, terrorism, the it’s-a-curse-and-a-blessing dichotomy of new technology). The fantasy elements were layered over the top of what was already a very strong story with strong acting.

Other superhero movies have also succeeded where they have avoided super-narcissism: the newest round Batman movies are really crime movies, and what drives the story is the conflict caused by the vigilante's need to act outside of the law in order to uphold the law, providing the opportunity for a complex and moving story. Similarly, X-Men and X2 were set against a backdrop of social prejudice and people trying to cope with being different. Those story lines grounded the movies, made us identify with the characters, and gave us greater allowance to suspend disbelief during the actions scenes. (X3 was just mutant alien robot zombies, though.)

So, if Watchmen can deliver the same, it will succeed. The original story certainly did, but that was the unfilmable “graphic novel.” We will see Friday whether Zack Snyder was able to keep the humanity, or whether it was lost in a series of pretty-but-vapid slo-mo special effects.

Oh, and Dear Lord, please let me forget everything I know about the book, so that I can maybe just maybe enjoy myself during this movie.
Posted by Rico Detroit at 6:00 PM