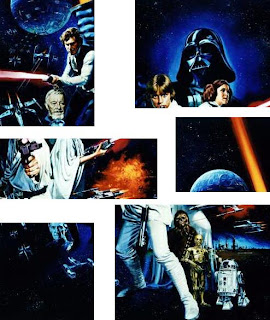 The question everyone wants to know is what order would you put all three of them in. Or maybe, if you broke each of the movies in two (since most are easily broken in two), how would you rank them. For example, would Return of the Jedi be above or below Revenge of the Sith? Obviously, The Empire Strikes Back would be number one. A New Hope would be number two. The first part of Return of the Jedi would be number three, but the last part might be near the bottom (just above any scene with Jar Jar). Anyways, you get the point.

He is absolutely right, of course: no matter how you do it, Empire ends up #1 and A New Hope #2. If I have to rank the movies as a whole, I would put them in this order:

If I get the flexibility to split them up, then I would keep the bulk of Episode VI where it is, as madscientist suggests, but the teddy bear parts would drop way down the list:
Speaking of quotes, by the way, my son pointed out that everyone in Star Wars says: "I've got a bad feeling about this."
Posted by Rico Detroit at 2:22 PM