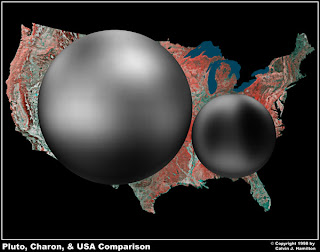 In case you haven't heard, the Illinois state senate unanimously passed a resolution declaring Pluto to be a planet. Pluto, as you may know, has always been something of a puzzle for astronomers, because it did not behave like the other planets. With more powerful telescopes, we've been able to discover many new exoplanets and planetoids, which have further expanded scientists' knowledge of the universe. As a result, the International Astronomical Union (IAU) has taken steps in recent years to establish definitions for the different astrological bodies. In doing so, they downgraded Pluto from "planet" to a new designation, "dwarf planet," in 2006.

But wait, Pluto was discovered by someone from Illinois. So the IAU probably just did that to dis the state, don't you think? But this is the state that gave us Rod Blagojevich, Tony Rezko, George Ryan, Otto Kerner, Al Capone... need I go on? This is a state that has no ability to control its base urges, and no patience for rules or facts.

So Illinois has said (unanimously remember), "F. you, science. We say Pluto is a planet."

I don't know what you were thinking, IAU, but it's on now. Illinois has stepped to you, and you had better step back. Hard. You wanna know how you do it? Here's how: they pull a knife, you pull a gun. Illinois sends one of yours to the hospital, you send one of Illinois' to the morgue. That's the Chicago way! Now do you want to do that? Are you ready to do that?!

You had better cowboy up, IAU. I want to see a resolution placing Peoria in the Kuiper Belt by Monday. Because if Kansas declares beef a vegetable next week, it's on your hands.