Narcissism = bragging about things you shouldn't be proud of 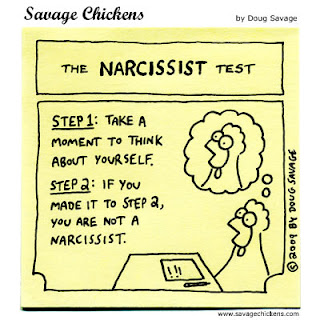 We all know the Internet is a vast reservoir of information, but when you need to answer some piece of trivia quickly (as opposed to accurately or thoroughly), sometimes Google just isn't good enough. In these cases, it would be overkill to ask Google to cross-reference a billion web pages and sort them all by relevance and popularity. Why make the poor folks at Google go through all that trouble, when all you really want to do is sound like you know what you're talking about?

No, if it's a quick hit of information you're looking for, you only need one of two websites: Wikipedia (if your question is somewhat normal and respectable) or Urban Dictionary (if it's not).

Wikipedia is filled with information that comes from normal people just like you. Well, not quite like you. Like you if you spent every waking moment thinking about the Latvian badminton championships. (Kārlis Vidass was totally robbed in the 2006 men's singles!) Like any public forum, every once in a while someone pisses in the pool, but for the most part the information at least seems plausible enough.

With Urban Dictionary, on the other hand, there are no wrong answers, just a lot of deviant behavior and juvenile humor. But sometimes that's all you need. Did everyone at the table laugh when you asked the waitress to toss your salad? (For the love of God, don't follow that link!) Well, now you know why... you sick bastard.

Anyway, I am ashamed to admit it (not really, or I wouldn't), but I occasionally contribute to Urban Dictionary. And a couple of days ago, they accepted the following definition from me:

alien robot zombies
definition: Something that loses its credibility and/or enjoyment because of over-embellishment.
examples: (1) He had everyone believing he was the President's brother, but the more he talked the more alien robot zombies his story got. (2) The first book in the series had great a storyline, but now it's just alien robot zombies.

So now the title of this blog has cultural relevance. Soak it in. Yes, it is that good.

I will end today with another one of my Urban Dictionary entries and one of my favorite all time sayings: