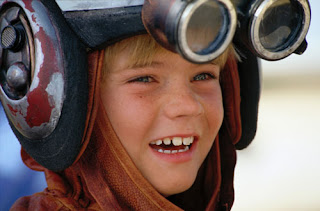 I have had a request to do some more movie reviews, so OK here goes...

I recently started watching the Star Wars saga again with my six year old. Last time we watched these movies, we watched them in the order they were made: IV-VI, then I-III. That's important, folks. Part of the fun of The Empire Strikes Back is the shocking reveal at the end. ("Luke, Obi-Wan never told you what happened to your father...") That's pretty much ruined if you've already seen the prequel trilogy. (I also showed my son the original versions the first time around, not George Lucas' digital updates with added scenes and special effects.)

This time through, we're watching them in numerical order instead of chronological order. Thus, I give you my review of Star Wars: Episode I - The Phantom Menace (1999).

SPOILER ALERT (although, really, if you haven't seen this movie already, you probably don't need to worry about it)

Rating: ** two stars ("tolerable") for adults (regular or fanboy), plus two additional stars ("recommended") if you're a six year old boy, but only one star ("Run, Luke, run!") if you're not a fan of the original trilogy.

Pros...
Cons...
So here is my movie review quote (for the back of the Blu-ray packaging): "Special effects and sets are spectacular... well-cast... one of the best of the series... non-stop action and excitement."

And here is the Crazy People quote: "The sci-fi equivalent of a fart joke... Jake Lloyd [is] no Macaulay Culkin... ever heard of secondary protocol?"

P.S. - Want a second opinion? Click here for an in-depth, 70-minute rant from Red Letter Media. (Fair warning: some of it is a little disturbing.)
Posted by Rico Detroit at 12:00 AM