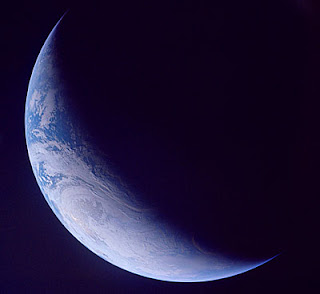 Last night I participated in "Earth Hour" and turned off all electrical devices in my apartment except for my refrigerator from 8:30-9:30 PM. I had candles ready, but my apartment complex didn't turn off the parking lot security lights, so I went to my window seat and read by their faint light for an hour.

It was the longest hour of my life.

I actually do a pretty good job of conserving energy: I put my computer into hibernate mode when I'm not using it, turn lights off whenever possible, use compact fluorescent light bulbs, keep enough air in my tires, keep the thermostat reasonable in the winter, open all my windows instead of using air conditioning, etc. But thank God electricity is there when I need it!

If Earth Hour taught me anything last night, it's that life isn't worth living without electricity. (How our ancestors managed to survive all those eons without it, I'll never know.) I'm all for improving efficiency and reducing pollution, but not at the expense of modern convenience. Environmentalism can only be taken so far before it starts to suck the joy out of life, and when that happens we lose a little bit of what it means to be human. (Not to mention starting a culture war that neither side can win.) Human beings are messy creatures - physically and otherwise - so as long as we're on this planet, the planet is going to have to put up with some of our mess. We can do better, but we can't eliminate all impact of our presence: as long as I keep breathing out carbon dioxide, I'm going to have a "carbon footprint." (Not to mention all of my other "emissions"...) There has to be a happy medium here somewhere: steps that people like me can take to leave the world a better place for their children - and for themselves.

In that regard, I'm glad we had Earth Hour - although I'm not sure the whole stunt actually helped significantly in a direct way. I've heard news agencies report on the number of kilowatt hours and tons of carbon dioxide that were saved, but the fact of the matter is that while these numbers sound big and impressive, in relative terms they are only a drop in the bucket. In addition, some of this "savings" will actually be made up by people who only delayed turning on the dryer until after Earth Hour was over.

But my six year old son loved it: he went around taking the batteries out of things and stocking up supplies like he was gearing up for a siege, and then had fun playing a board game with his mom by candlelight. And it gave me an opportunity to talk to him about conservation, and about being a good shepherd for the planet's resources. Suddenly the "turn the lights off when you're done in the bathroom" speech held more significance, and I could see a little light bulb going on over his head. Or rather off.

Mostly, though, it was nice seeing the world participate in something together. It may have only been symbolic, but it was a nice way of saying: "Yes, we're all in this together."

And now that it's over, I'll never take my iPod or TV or car or the Internet for granted again. And that's the main reason I'll try not to waste the precious energy that powers them!

P.S. - Just as I got ready to post this entry, the power went out. Point and match.
Posted by Rico Detroit at 8:37 PM