Solving the double planet problem (you didn't know you had) 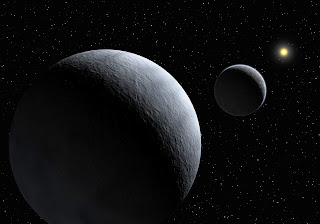 In 2006, the International Astronomical Union (IAU) made a lot of headlines when it declared Pluto "a dwarf planet" instead of just "a planet." This angered a lot of people who had grown up with Pluto as the "ninth planet," and the mainstream media had a field day with it. Following that media storm, the IAU has done very little to stir the Pluto pot again. In fact, while astronomers have been working away discovering all sorts of new things, they've done very little to polish any of it for consumption by the general public.

That's a shame, because every day we learn more about our Solar System and our Universe, and it deserves a little art, a little sex appeal. While the mathematics behind "2007 OR10" may be enough to excite astrophysicists, the Universe does not belong to them alone. That little ball of ice and rock deserves a name, some mysterious combination of syllables, alluding to some ancient Greek or Algonquin deity, that will make it real to poets and dreamers and school children everywhere.

As an amateur astronomy buff, I have lots of opinions on this matter. In this post and others, I will share them and I will do my best to justify my positions with sound reasoning.

For now, I'd like to focus on the other Pluto problem, the one that almost also got fixed in 2006, but ultimately was left undecided: namely, do Pluto and its largest satellite, Charon, form a double-planet system? A strong argument can be made that they do. The center of gravity of the system (the barycenter) lies between the two bodies rather than inside of the larger body (Pluto) as in a normal planet-satellite relationship. Indeed, while most planetary satellites in our solar system have less than 1/4,000th the mass of the planet they orbit, Pluto's mass is only about 9 times greater than Charon's. So the barycenter argument (namely, that a double-planet system is one where the barycenter lies outside of both bodies) seems to make sense, and that definition was almost adopted in 2006.

However, two political footballs caused the issue to be shelved:

While the Earth-Moon system would not currently be classified as a double-planet under the barycenter definition, it is far too close for comfort for some. Again, while the mass of most of the moons in the Solar System is negligible compared to the planets they orbit, the Earth is only about 81 times the mass of its moon. As a result, the barycenter of the system is closer to Earth's surface than its core, causing it to seem to wobble in its orbit. And since the Earth and Moon are moving apart at a rate of about 1.5 inches (3.74 cm) per year, the barycenter will be beyond the surface of the Earth in a few billion years. If the sun hasn't yet swelled into a red giant and engulfed the inner solar system, our future robot overlords will have to declare the Earth-Moon system a double planet under the barycenter definition.

There are compelling arguments that the Earth-Moon system should be considered a double-planet, and if nothing else the system is proof that the issue is a complex one. However, I think most people would agree that the Moon is not on the same playing field as the Earth in this arrangement. I think the Moon is a "satellite planet" (I'll go into that more in a future post), but I would stop short of classifying it as part of a "double-planet" system.

Just as moons revolve around planets, so do the planets revolve around the Sun. The Sun is so massive (more than 300,000 times the mass of the Earth) that in nearly every case, the barycenter of each planet-Sun relationship is buried deep within the star. In fact, the Earth could orbit more than 50 times further than its current distance from the Sun, past Neptune and Pluto and the Kuiper Belt, and the Sun-Earth barycenter would still reside within the Sun.

However, one body in our Solar System is just massive enough (about 1/1,000th the mass of the Sun) and far enough away to force the barycenter to a point outside of the Sun: Jupiter. The Sun is obviously not a planet, but does it somehow form a binary system with the gas giant? Mathematically, it may make some sense, but from our heliocentric understanding of the Solar System, it's hard to see how Jupiter is anything other than the Sun's largest satellite. Using the simple definition proposed in 2006, however, would have left this can of worms open.

Why the barycenter definition doesn't work

In addition, the barycenter definition allows factors that should be inconsequential, such as a planet's density, to factor into the decision. Consider that if the Earth was the same mass but twice as dense, its radius would shrink to the point that the barycenter of the Earth-Moon system would fall outside of both bodies, despite everything else being the same. This makes the barycenter definition seem very arbitrary. It is a convenient short-hand definition, but it fails to stand up to scrutiny.

The fact is that every two-body system has a barycenter, and it is never at the exact center of the larger body, even if it is only infinitesimally removed from it. But the location of the barycenter only begins to describe the ways in which those two bodies interact.

Another definition that does work

Fortunately, there is another device we can use to define "double-planet": tidal lock. Most regular satellites around major planets become tidally locked, meaning that they have one side that always faces the planet. The Earth's own satellite is a good example: we never see the "dark side" of the Moon, because it always faces away from the Earth, while the "light side" always faces toward us. (Both sides actually get just as much sun, but we never see the light reflecting off what we call the "dark side.")

If a satellite is large enough in relation to the body it orbits, it is possible for both of them to become locked. This phenomenon has been observed in binary asteroids and binary stars, and most notably is the case for the Pluto-Charon system that sparked this entire debate. At this point, with the two bodies orbiting each other as if there were a rod connecting them, they can unequivocally be called a "double-planet."

One of the drawbacks of this definition is that it takes some time for the bodies to become locked. However, it also takes time for single planets to form and stabilize in their orbits. There is an inherent amount of chaos in the early stages of any system, and there is no harm in waiting until a system matures before applying a label to it. Thus a protoplanet eventually becomes a planet, and a more chaotic binary system eventually settles into a double-planet system.

Another drawback is that tidal lock hasn't been studied in depth, and there are many bodies - even many satellites of major planets - for which we do not know their status. However, we can make educated guesses, and in cases where we think there is a good chance of double-planet status, we can do more investigation. And the terms "binary" or "multiple" can always be used when in doubt, as they do not denote any relationship other than a shared orbital system.

Finally, although the Sun-Jupiter system is removed from "double" contention, we have discovered at least one system where a star has become tidally locked to a planet: Tau Boötis, a star slightly larger than our Sun, is locked to a close-orbiting gas giant planet, Tau Boötis b. This planet is a little more than four times the mass of Jupiter but orbits at a distance comparable to Mercury. (Incidentally, the barycenter of this system is well within Tau Boötis, not between the two bodies.) In this case, the Sun-Jupiter question arises again: is it possible for a star and a planet to form some kind of "double" system? I think the existence of this system point to yes, although there may be some other explanation - something we don't yet understand that would have caused the planet to revolve at exactly the same rate as its star rotates. If true, however, we can't call them "double-planets" or a "double-stars." I would suggest just calling it a "double system," but for a more poetic term we could use "faux double-star" or "uneven double."

So far, it looks like the only bodies of significant size that are mutually locked in our Solar System are Pluto and Charon. So they should be called a double-planet. Yes, I realize they would be double "dwarf planets" according to the IAU. And, yes, I agree that "dwarf planet" is a good term for them. But not for the same reasons. More on that, and on how the IAU botched their definition of "planet," in the next post...

Image: artist's rendering of Pluto, Charon and the Sun
Posted by Rico Detroit at 6:00 AM 2 comments: 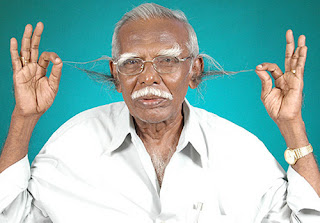 New on Urban Dictionary compliments of yours truly:

Example:
"Hey I just cleared level 5 on Angry Birds!"
"Congratulations on your uncomplishment."
Posted by Rico Detroit at 9:00 AM 1 comment: