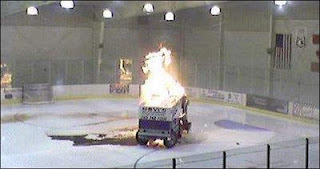 Wow, it's April already. Where did the first quarter go?!

Anyway, for all you hockey fans, I found this interesting story posted today on my company's intranet...

Diesel engine shoots and scores with the “coolest machines on ice.”
When EPA recently re-wrote its emissions laws to classify ice resurfacers as off-highway vehicles, no doubt the biggest winners were the nation’s ice rink owners, who had lobbied for more horsepower for years.

After the EPA ruling, Diesel Engines Inc. distributor SoCal Power Systems wasted no time contacting Zamboni, which is headquartered in Paramount, California. SoCal sales associate Bjorn Frie had grown up playing youth hockey in his native Sweden, and recognized the opportunity that diesel power could provide for a company like Zamboni.

“The DEX21 Series diesel has been in hot demand,” said Zamboni’s Vice President of Sales, Enrico Zamboni. “It used to take a pair of machines nearly 12 minutes to resurface a typical ice rink, but with an X21 in it, a single Zamboni can now complete the job in under three minutes. That has allowed rink owners to substantially increase ice time and hence revenues.”

“It took some extra engineering to get it to work,” said Frie. “But customers have been willing to pay a premium for it, and Zamboni sales have gone through the roof. Talk about a hat trick!”

Canadian distributors have also reported a slew of repower opportunities, and the DEX21 may end up having a profound effect on Canada’s national pastime. Since the game of ice hockey moved indoors in the late 19th century, most hockey games have been played with only three periods. But as the official ice resurfacer of the National Hockey League, the new Zambonis have sped up the game to the point where the NHL is finally considering bringing back the missing fourth quarter.
Posted by Rico Detroit at 6:00 AM