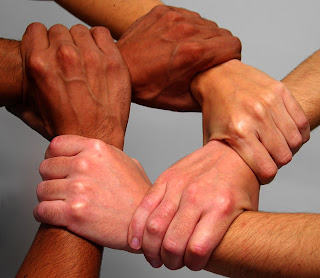 This is a "party game" I invented. It is very simple and a very effective ice breaker. My company has used it twice at employee meetings (breaking into groups of about 8-12 people), and it can also be used at private parties. It is especially good when the group assembled is not very familiar with each other.

Everyone works together as a team in this game. To begin, everyone forms a circle. (Throughout the game, people do not need to stay in their original seat - they can move anywhere in the circle in order to make the "links" work.)

The goal of the game is to form unique links with the people on either side of you. These links must be something that only those two people - and no one else in the circle - share in common.

The links may not be anything obvious from looking at the people. (For example, the only two people with mustaches or the only two wearing green.) Beyond that, anything goes. For example, in the first game, I formed a link with the only other person who had read Dostoevsky's Crime and Punishment. (Although I had read an English translation, whereas he was Russian and had actually read it in its original language!)

Even after people form their own links, they can still participate, helping to find common ground between the people remaining. The last links are always the hardest!

For smaller groups, you can optionally have everyone uncover a unique link with every other person playing.