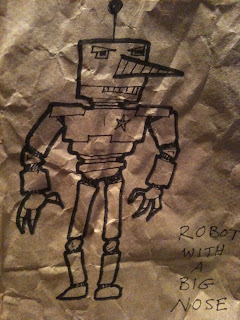 Every school night, after I put my son to bed, I pack a snack for him to take the next day in a brown paper bag. But before I do so, I draw a picture on the bag.

My ex started this ritual, but somehow it has become my thing. It started out as just a Superman logo: every day, his name on one side and a big "S" emblazoned on the other. Then it became the Batman symbol for a while. Then he asked me to draw Batman. Then other superheroes: Superman, Spiderman, Hulk, Green Lantern, Iron Man. Lots of Iron Man.

We went through dinsoaurs for a while, and bionicles (I'm still not really sure what those are supposed to be), and Pokemon characters. And Star Wars. We did a few Jedi, but mostly Clone Troopers. Man, do the kids ever love Clone Troopers.

Lately, it has been something called "Ben 10" - that's a cartoon show about a boy who turns himself into different aliens. That kept me busy for a while. It was around that time that I bought some new Sharpies and the drawings went from black-and-white to full-color.

Now we're back to Batman and his friends. Tonight was someone called the Blue Beetle. I don't think he was a superhero back in my day, but I found him on the Internets. His arms looked a little goofy when I drew him, but that's OK.

Once in a while I slip in something really goofy. Mostly that's when I mess up whatever I was trying to draw, but sometimes I just feel like drawing silly faces. I did that a lot when I was young. I think that's a big part of the joy of being a father: rediscovering the fun things you "grew out of."

After a while, I guess I realized this ritual of mine is really more about me than about him: if I didn't enjoy it, I wouldn't do it. I wonder sometimes what he'll remember about elementary school when he's old like me; what will make the cut as a good memory? Maybe the lunch bags will, maybe they won't. But it really doesn't matter: for now, it makes us both happy.
Posted by Rico Detroit at 9:22 PM