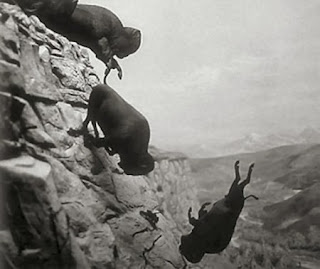 
Click here for even more ridiculous English sentences.
Posted by Rico Detroit at 6:00 AM 5 comments: 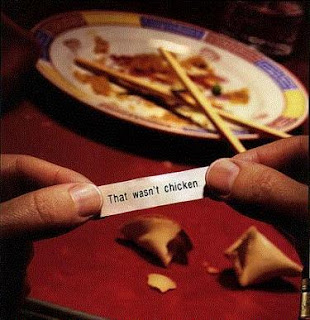 The universe can be as mysterious as you want it to be, but if you're brave enough to know the truth, I am going to spell it out for you here.

At the end of your meal in a Chinese restaurant, they will bring each diner a cookie with a piece of paper inside it. You do not have to eat the cookie - there is no effort made to make it taste remotely edible anyway - but you do have to open the cookie, remove the paper and read it. Inside is your fortune. Failing to read it will not change it.

Of course, all of the fortunes are good, right? No Chinese restaurant wants to print fortunes that say "you are going to die of swine flu this year" or "your relationship will end in heartbreak." That doesn't bode well for repeat visits.

But not every customer can actually be lucky. In fact, such is the nature of this cruel, finite universe that every life sees its fair share of pain, misery and disappointment, and even the mightiest among us will finally succumb to death in the end. You may have a few laughs along the way, but make no mistake about it: your life is a tragedy not a comedy, and your story will end badly.

But back to fortune cookies. Don't be fooled! There are two kinds of cookies: those that provide a fortune, usually good ("unexpected money will come your way"), and those that make no claim about telling the future whatsoever ("you are well liked by your peers").

The former type should be believed to a fault, as they are never wrong. If the cookie says you're going to get a new job and a big raise, immediately quit your current job and enjoy the time off: you've earned it! If it says you will soon meet the love of your life, dump your current significant other as fast as you can, because he/she is only slowing you down.

However, I am sorry to say that the second kind of cookie always lies. If it does not predict your future, then there is simply nothing good in your future to predict. It says, "you have a warm heart and a friendly smile" - do you really buy that even for a second? No, you know as well as anyone that you're a douche bag. The cookie is trying to let you down easy, but I feel compelled to inform you that there is bad luck headed your way. Probably really bad luck. There is a new death every 0.57 seconds after all. Approximately 212 people have died just since you started reading this blog post. I'm just saying.

Then again, because the cookie spares you the grisly details, there's nothing you can do about it and really no use worrying about it. As you read your so-called fortune, push the negative thoughts out of your mind and bury them deep inside. Read the fortune out loud and add the words "...in bed" to the end to enjoy a good laugh with the people around you.

Enjoy it while you can.
Posted by Rico Detroit at 8:15 PM 1 comment: