His kingdom covers 70% of the Earth 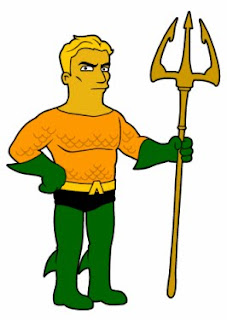 So I blogged yesterday about the new Watchmen movie, and that got me thinking: what superhero would I like to see get his own movie? And the answer, of course, is Aquaman. I know this was a long-running gag on Entourage, and yes only his ability to talk to fish separated him from Wendy and Marvin in the Saturday morning cartoon. But I am serious here. From what I understand, the idea has been kicked around Hollywood more than once, and I think now is the time for this movie to finally get made.

Of course, keeping what I just said yesterday in mind, it can't be a movie about Aquaman per se. An origin story or a coming-of-age-with-super-powers story would blow. (No thanks, CW.) It has to be a movie with a solid back-story that will conveniently allow "Aquaman" to be worked into it. (Actually, Aquaman's B-list name might be his biggest problem. How about "Prince Of Atlantis" for a movie title?) We can view a lot of sci-fi as pure escapism, but superheroes are supposed to live among us, so we need to feel they are a part of our world. We need to relate.

For Aquaman, the most obvious angle might be to do a back-story about climate change. He might actually be the best superhero to tackle that one - although I would gag on it if was done too heavy-handed. (Maybe Aquaman's secret undersea civilization needs to be part of the problem, and Aquaman would be caught in the middle: no one is clearly right or wrong, and all are affected.) 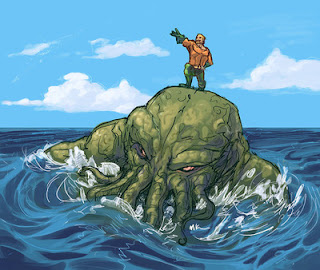 The real underwater world is as exotic as any extraterrestrial landscape and would lend itself to some dynamic creatures and perils. And hey, somebody is going to need to save humanity from those ancient Cthulu-like monsters that will be freed from the melting polar ice caps. The CGI special effects could be outstanding. If the story comes first, this could be a good movie.

OK, so I'm totally biased because my son loves Aquaman. This phase he's in probably only has about a two week window, so get on it, Hollywood!

P.S. - Please, DC Comics, do this before Marvel does.
Posted by Rico Detroit at 6:00 PM