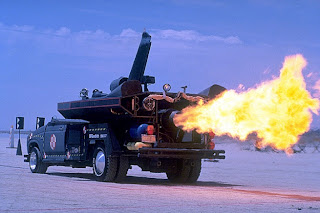 I've spent the entire morning digging through my company's intranet archives. There's some fascinating stuff in there. For example, I came across this article from exactly one year ago today (April 1, 2008). This is fascinating stuff, and I'm amazed the mainstream media hasn't reported on it. I'm going to look to see if I can get a project status update...

Newest diesel technology has been called revolutionary: what is it and how does it work?

Last week, the new “oscillation overthruster” technology from Diesel Engines Inc. (DEI) was successfully tested in an experimental high-speed military vehicle at an undisclosed site in western Texas. The test was conducted by an engineering team led by Dr. Banzai from the DEI Hong Kong office.

The basic principles behind the oscillation overthruster were first demonstrated by Dr. Emilio Lizardo, in a series of small experiments in the late 1930s. However, it wasn’t until 1984 that serious work began to develop the technology for practical application. Coupled with recent advances in electronic controls and fuel injection, oscillation overthrusters are now poised to redefine the diesel industry.

The oscillation overthruster functions as a miniature particle accelerator, using energy from the diesel combustion process to power two colliding beams that mix electrons and positrons together. That collision results in a series of powerful subatomic explosions, which are then harnessed to provide either a highly efficient power source or a means of achieving rapid transdimensional propulsion (RTP).

DEI’s oscillation overthrusters are being assembled by noted defense contractors Yoyodyne Propulsion Systems. “History is made at night," says Yoyodyne company spokesman John Whorfin, "Character is what you are in the dark.”
Posted by Rico Detroit at 12:00 PM