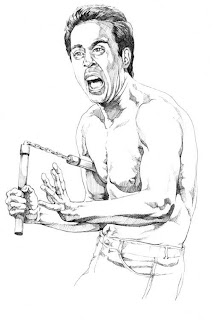 Sometimes a brilliant series - be it in television, movies, books or whatever - hits a horrible, horrible bump. Sometimes this bump happens in the middle and the series never recovers: that's called "jumping the shark." (For example, the Star Wars series jumped the shark somewhere during script revisions for Return of the Jedi

.) Sometimes the bump is explained away by the introduction of something new that negates what just happened: that's called "retconning."

But sometimes, the bump comes at the end and no one ever bothers to fix it; the series just dies along with everyone's hopes and dreams. Such is the case with Seinfeld

, a brilliant sitcom with one of the worst finales ever - where none of the characters behaved the way we expected them to and the unspoken "rules of engagement" for the Seinfeld universe were violated.

More than a decade later, I still can't believe how bad it was. I'm obsessed with it like George Costanza was obsessed with the missed opportunity to deliver a snappy comeback. The real shame is that they could have done so much better. Before the finale, I had actually sketched up what I thought was a great plot for the series-ender. And so, without further ado, here is what - in my mind - really happened on May 14, 1998.

First of all, the tone is just like any other Seinfeld episode. The episode may be longer than normal, and have more story lines running at the same time, but it is essentially just another episode. (That's only fitting for a "show about nothing.")

The plot involves a big TV event that none of the characters want to miss. This frees the writers to insert all kinds of jokes about the shallowness of hype for hype's sake, relevant because of all of the hype around the Seinfeld finale itself. One of the catch phrases for the finale is "It's must-see TV!" - making subtle fun not only of the show but of the network it aired on. They can get away with that, because they've earned it.

Jerry decides to hold a viewing party for "everyone I know" and rents a spacious ballroom with lots of screens. This allows you to reintroduce a million former characters, who interact with Jerry and with each other before and at the party. It also lets you replay on the jumbo screens some slips of Jerry's stand-up routines and various videotaped segments from the entire cast throughout the series (for example, George eating a sundae at the U.S. Open, Elaine dancing or Kramer appearing in an episode of Murphy Brown).

Madcap hilarity ensues when Jerry, Elaine, George and Kramer get tied up and are running late for the party. After many hilarious hijinks, they all meet up and make their way against all odds to the party, just as the "must see" event is starting. Unfortunately, just as they get there, the power goes out throughout the city - caused, of course, by a chain reaction started by Kramer half-way through the finale. (Coincidentally, the power really did go out in Baltimore during the Seinfeld finale.)

All of the guests leave, and we are left with just our four main characters. George says "Well, I guess we missed it," and Jerry replies, "Yes, it's all over now." After a pause, Elaine adds, "Well, it's just TV." They then all laugh and walk out together as the camera sentimentally pulls away. In the distance, we hear Kramer scheming to fly to Argentina, the one country where the "must-see" event doesn't air until tomorrow...
Posted by Rico Detroit at 6:00 AM