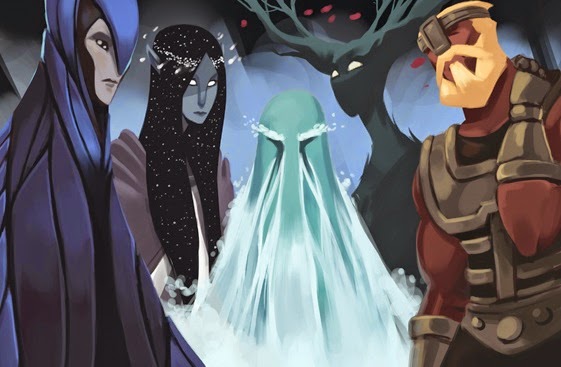 For years now, I’ve spent a good deal of my spare time untangling the Secret History of the Universe from clues scattered throughout the writings of mad geniuses and the rambling, obsessive data-dump of fan-boys throughout the infosphere. Others have done this before, but usually for the purpose of creating what-if style fan-fiction, which tends to come off as forced. For me, though, it is an exercise in discovering patterns and overlaps that have existed all along and just haven’t been seen before. One such example is the connection between the Valar, the god-like powers of J.R.R. Tolkien’s Middle-earth, and the Vanir, a pantheon of gods in Scandinavian mythology of whom very little is known.

Tolkien’s Middle-earth borrowed heavily from Germanic mythology, and so there are already many parallels to begin with, and that makes it easy to reconcile the two. For example, one of the nine realms of traditional Germanic cosmology is “Midgard” (Earth), which is translated “Middle-earth” or “Middle-enclosure.”

Tolkien also said that the history of Middle-earth occurred at some point in our own distant past. For numerous reasons, I have made the argument in my timeline that Middle-earth history predated the Thurian and Hyborian Ages of Robert E. Howard’s writings (the times of Kull of Atlantis and Conan the Cimmerian, respectively).

One of the interesting things about Tolkien’s Valar is that he never gives us their actual names, only a variety of titles by which various peoples of Middle-earth referred to them. In fact, most of the titles that we know from Tolkien’s writings are in the Elvish tongues. That means that if the same beings did appear at a later point in human history, we might not immediately recognize them as such because they might be called by different names.

Thus, in my timeline, I made the argument that the primary gods of Atlantis in Kull’s time were actually the Valar known by different names. And still later, they would be known to other peoples by yet other titles. This is not surprising given the great lengths of time (tens of thousands of years) and variety of peoples and languages who revered them.

The Valar first came to Earth around 80,000 BCE. By the year 23,000 BCE, the Elves had left Earth and the Elvish names of the Valar had been all but forgotten. By the year 7500 BCE, the influence of the Valar had waned and their memory was kept alive only by a small band of followers in the northern kingdom of Vanir. The name “Valar” itself had been forgotten by this time, and the beings were known collectively as “the gods of the Vanir.” 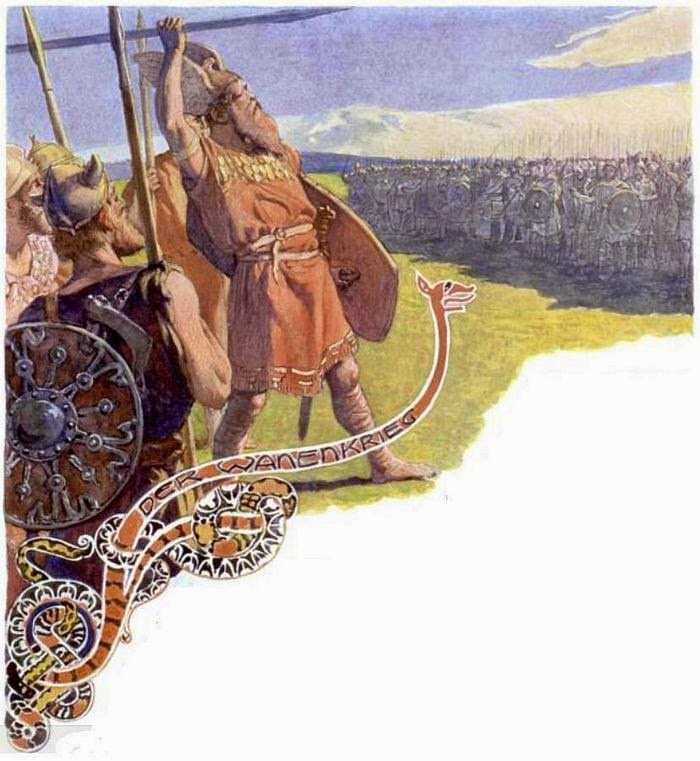 Around 7000 BCE, the Vanir and their gods went to war with the neighboring kingdom of Æsir and their gods. This Æsir-Vanir war is spoken of in Norse mythology. It ended with a truce, as the gods sent representatives to dwell in each other’s kingdoms. According to legend, the Vanir sent a sea god named “Njörðr” and his “sister” (who was also his wife and later the mother of his two children, Freyr and Freyja) to dwell among the Æsir.

The sea god of the Valar was Ulmo, and so I propose that “Njörðr” was simply another title for Ulmo. The wife’s / sister’s name is sometimes given as “Nerthus,” and I propose that this would be Nienna, the only other unmarried Vala. In fact, it has been speculated that “Njörðr” and “Nerthus” are masculine and feminine forms of the same name, so it may be that “Njörðr” was simply a title given to Ulmo for being the husband of Nienna, or Nerthus. Another Vanir name mentioned prominently in Scandinavian mythology is Ull (or Ullur), which certainly sounds like another name for Ulmo.

According to my timeline, after the Æsir-Vanir war, the gods of the Æsir were granted a homeland on the great world of Aman, where Tolkien said the Valar and Elves lived. If we match up the realms of Aman, as described in Tolkien’s writings with the traditional nine realms of Scandinavian mythology and the modern interpretation of those realms as seen in Marvel’s Thor comic books, we see that a clear picture emerges: 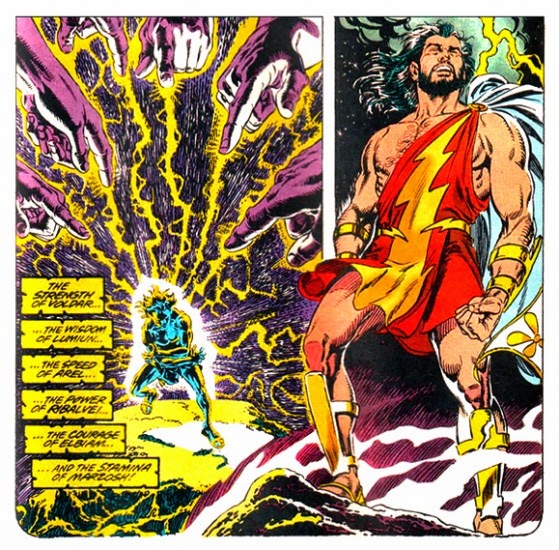 Today, the Asgardians get all of the press, mostly thanks to Thor, while the Vanir have mostly receded into the background. Following the Æsir-Vanir war, the Vanir decided to withdraw from interfering directly in the affairs of human beings. Instead, they chose a young boy on Earth to be their representative. This boy, who would eventually take the name “Shazam,” would spend the next 3,000 years as their champion, granted extraordinary powers by them in the battle against evil. Whenever he uttered the magic word “Vlarem,” composed of the first letters of six of the names he knew them by, he would gain an extraordinary gift from each of them: the strength of Voldar, the wisdom of Lumiun, the speed of Arel, the power of Ribalvei, the courage of Elbiam and the stamina of Marsosh. He would spend the next 3,000 years as their champion battling evil, and then thousands more searching for the right successor.

In 1939, a young American boy named Billy Batson inherited Shazam’s power and now battles evil-doers as Captain Marvel. However, because no one knows who the Vanir are these days, he tells everyone his powers come from the wisdom of Solomon, the strength of Hercules, the stamina of Atlas, the power of Zeus, the courage of Achilles and the speed of Mercury.

The 14 original Valar / Vanir are as follows. Their oldest known names (the names given to them in Middle-earth in the Quenya Elvish tongue) are listed first, followed by all known alternate names.


(All of the above names are from J.R.R. Tolkien’s writings, except as noted: *Robert E. Howard’s writings, **Norse mythology, ***DC Comics.)

The cool thing about this is that it gives some added depth and background not just to the Vanir, but to all of Asgard - which as we know from the Thor comics and movies is still thriving in our modern world.
Posted by Rico Detroit at 6:00 AM