Most anticipated splody movies of 2013 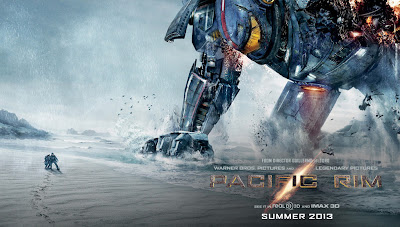 At the beginning of each year, I check to see what movies are coming out and try to informally rank which ones I think will be worth seeing. My formula for success is equal parts good character development and explosions. Here is what I think about the movies scheduled for 2013:

1. Pacific Rim
When: July 12. Why I’m looking forward to it: Because this is my ultimate ten-year-old wish fulfillment movie, a film about giant monsters fighting giant robots. At the end of the day, you can keep your Jedi superheroes and ninja wizards and time-traveling zombies: this is my first love. From Godzilla to Gamera, from Ultraman to Voltron, and from Mazinger Z to Johnny Sokko’s Flying Robot – supersize it, give it an attitude and make it destroy Tokyo, and you’ve won my heart. Also, director Guillermo del Toro (Hellboy, Pan’s Labyrinth) is a fanboy himself, and he is a mad genius a bringing creative visuals into a movie without over-relying on CGI. I’m also excited to see man-crush Idris Elba as one of the leads. After being squandered in last year’s Prometheus, he’s already delivered one of this year’s best lines in Pacific Rim’s first trailer: “Today, we are cancelling the Apocalypse!”

2. Star Trek Into Darkness
When: May 17. Why I’m looking forward to it: Because the first installment of the new rebooted Star Trek was thrilling in ways that Trek has never been before. Some die-hard fans were turned off by J.J. Abrams’ re-imagining of the Trek universe, but it’s exactly what was needed to breathe new life into the franchise. As I said in my review: “We’re all Trekkies now.” The trailers for this second installment have looked equally dynamic, and the addition of the utterly amazing Bernard Cumberbatch as the villain is an inspired choice.

3. Iron Man 3
When: May 3. Why I’m looking forward to it: Because the first two were dynamite. (Yes, the second wasn’t as good as the first, but it still had a lot going for it.) Following the huge success of The Avengers, the next Iron Man solo movie will take the hero in a new direction with a new director, Shane Black – who worked with Robert Downey, Jr. on the excellent, career-rejuvenating Kiss Kiss Bang Bang. I love Iron Man and I love RDJ, so this is a no brainer.

4. The Hobbit: The Desolation of Smaug
When: December 13. Why I’m looking forward to it: Because director Peter Jackson has proven that any chance to escape to his vision of Middle Earth is worth the price of admission. Yes, his Hobbit trilogy should have probably been two movies: they covered half of the book in the first film and I have no idea how they’ll stretch the rest into two more films, even with J.R.R. Tolkien’s later additions and side notes. But I’m thoroughly looking forward to finding out. Oh, also: Smaug is an incredibly badass dragon and he is being voiced by the incredibly badass Bernard Cumberbatch. (See Star Trek Into Darkness, above: this will be the Year of Cumberbatch.)

5. Man of Steel
When: June 14. Why I’m looking forward to it: Because Superman is the first superhero and deserves to have a kick-ass movie, and I hope this is it. The original Superman theatrical shorts in the 1940s were among the best cartoons ever made (and they’re in the public domain, so you can find them for free), but his live-action appearances have yet to do him justice. Christopher Reeves was a great Superman, but he was shackled with weak scripts and special effects that couldn’t live up to the spectacle. (The 1978 film started off well, but the ending ruined my appreciation of that incarnation: reversing the rotation of the Earth wouldn’t turn back time, it would kill us all!) This movie promises a lot more action than we’ve ever seen from the Man of Steel before, and Christopher Nolan (The Dark Knight, Inception) had a hand in crafting the story, so I remain hopeful. However, director Zack Snyder (300, Watchmen) is hit-or-miss, so I’ll need to see it to believe it.

6. Thor: The Dark World
When: November 8. Why I’m looking forward to it: Because against all odds there is a Thor 2. When I heard they were making the first one, I at first thought it wouldn’t do well based on my vague recollection of the character. But Chris Hemsworth nailed the role, creating a character who was larger-than-life, but still relatable. Out of all of the main characters in The Avengers, Thor had the least character development, but his fight with the Hulk was one of the best action sequences. Look for more badassery in the sequel as the explore new “realms” and fight new fantastic foes – including Ninth Doctor Christopher Eccleston as the “dark elf” Malekith the Accursed and LOST's Mr. Eko, Adewale Akinnuoye-Agbaje, as Kurse. New director Alan Taylor cut his teeth on the acclaimed HBO fantasy epic series Game of Thrones, so he should bring a lot to the table for this kind of tale.

7. The World’s End
When: October 25. Why I’m looking forward to it: Because this is the final film in the so-called “Three Flavours Cornetto Trilogy” that also included Shaun of the Dead (2004) and Hot Fuzz (2007). The three films are actually unconnected except for sharing the most tenuous thematic elements, but If you’ve seen the other two, you’ll know why I’m excited. (And if not, go see them!) Director Edgar Wright and stars Simon Pegg and Nick Frost are just brilliant, and the films are both exciting and hilarious. The plot of this one: “Five friends who reunite in an attempt to top their epic pub crawl from 20 years earlier unwittingly become humankind's only hope for survival.”

8. The Wolverine
When: July 26. Why I’m looking forward to it: Because Wolverine is a badass character who deserves better than he got in his last two films – the empty but tolerable X-Men Origins: Wolverine (2009) and the gawdawful X-Men: The Last Stand (2006). I am not a big fan of Hugh Jackman in the role, but I know he’s very popular, so I doubt they’ll replace him anytime soon. (For the record, though, Wolverine is much shorter, less charismatic and more savage. In short, he isn’t one to work on musicals between X-Men films.) What I am excited for, though, is the story that this movie is based on. I read the four-issue comic book miniseries in my younger days, and it was incredible – full of ninjas and samurai sword fights and unexpected surprises at every turn. My gut tells me they’ll mess it up, but I’m holding out at least a little hope that they’ll finally get it right.

9. Elysium
When: August 9. Why I’m looking forward to it: Because director Neill Blomkamp’s last film, District 9, was brilliant – a fresh twist on the alien invasion story that was really an examination of our own views of prejudice hat just happened to have an exciting action film thread through it. This is his much anticipated “hard sci-fi” big-budget follow-up, starring Matt Damon and Jodi Foster, and it’s getting good buzz.

10. Ender’s Game
When: November 1. Why I’m looking forward to it: Because it’s based on a popular sci-fi book and is getting a lot of buzz. While I don’t know much about it, what I have heard has my interest – especially the promise of epic zero-gravity space battles.

11. The Hunger Games: Catching Fire
When: November 22. Why I’m looking forward to it: Because I was wrong about The Hunger Games last year, and I’m not too proud to admit it. I thought it was going to be a teenie-bopper Twilight-style chick flick, but it got such good reviews and friends I trust recommended it, so I checked it out – and found it deserving of the praise. Jennifer Lawrence was incredible as Katniss Everdeen, a young woman forced to compete in a to-the-death battle royale before a televised audience in a strange, retro-futuristic dystopia. But instead of focusing on the action or the science fiction trappings, the movie wisely kept those elements in the background and stayed focused on Katniss’ experience in the midst of the insanity, and that made it all that much more powerful. Now I can’t wait to see what happens next.

12. I, Frankenstein
When: September 13. Why I’m looking forward to it: Because the premise is both ridiculous and intriguing. Frankenstein’s monster (played by Aaron Eckhart) gets caught between two warring clans of immortals in an ancient city. I don’t have high hopes for this one, but if it works – even as a cult classic – I’ll be thrilled. I’m a huge fan of this monster.

Finally, some other splody-looking movies that just might prove worthwhile in 2013 include...