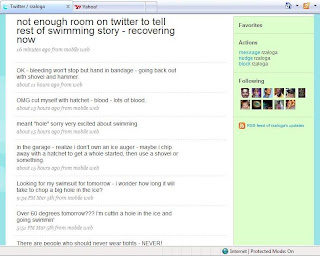 I also subscribe to tweets from other people. Some are friends and some just tweet about topics I am interested in (gluten, music, whiskey, diesel engines, etc.). I'm not into the whole cult-of-personality thing, but if you want to know when Madonna is having tea with the queen or taking out the trash, you need to be on Twitter.

You can follow me on Twitter here. Sometimes my tweets are pretty mundane: simple, in-the-moment updates to let my Twitter and Facebook friends know what I'm up to. (For example: "sinuss hedaache cannnot tfrink straihgt ughh.") At other times, they can be pretty entertaining standing alone. The enforced brevity can be limiting, but sometimes it can also be freeing. Sometimes there is beauty to being creative "inside the box." With that in mind, I have reprinted some of what I'm calling my "twisdom" below. (Disclaimer: uh... well, maybe you had to be there...)


I can pull this trigger 128 more times before this battery dies!


oh cruel spring - how you tease me, entice me, but leave me cold


worst ad placement ever: Ronnie Milsap gospel album in the middle of something called "Robot Chicken" on Cartoon Network


A picture is worth a thousand words. EXACTLY a thousand - no more, no less.