Most anticipated splody movies of 2017 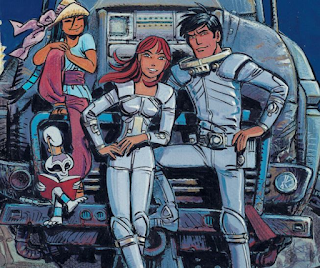 At the beginning of each year, I check to see what movies are coming out and try to informally rank which ones I think will be worth seeing. My formula for success is equal parts good character development and explosions. Here is what I think about the movies scheduled for 2017:

1. Guardians of the Galaxy Vol. 2
When: May 5, 2017. Why I'm looking forward to it: Vol. 1 of this series was a breakout film for Marvel Studios, and a standout in their catalog. I'm really looking forward to seeing what's in store next for this band of lovable losers.

2. Star Wars: Episode VIII
When: December 15, 2017. Why I'm looking forward to it: The Force Awakens redeemed the Star Wars universe after George Lucas ran it into the ground with the prequels, and this year's Rogue One was an amazing side story. I expect this year's installment to continue the momentum. This just barely misses the top spot on my list.

3. Thor: Ragnarok
When: November 3, 2017. Why I'm looking forward to it: Thor has in some ways been the weakest link in the Avengers line-up for Marvel Studios, but this year's trilogy-ender looks to correct that. Not only will the God of Thunder go up against his toughest opponents yet, but he will have the Hulk beside him. Oh, and Loki will be back. This will be a fun ride.

4. Spider-Man: Homecoming
When: July 7, 2017. Why I'm looking forward to it: Spider-Man was only in Captain America: Civil War for, like, 5 minutes, and already this is the best version of him ever put to screen. I can't wait to see an entire film of Tom Holland capturing the real Spider-Man -- something we have never seen. Full disclosure: I desperately wanted to be Spider-Man from age 5 to age 15. (OK, that last number is a lie; I still want to be Spider-Man.)

5. Kingsman: The Golden Circle
When: June 16, 2017. Why I'm looking forward to it: If you've seen the first Kingsman movie, you know why. If not, go see it. This is a witty, fast-paced spy-vs.-spy action/adventure series. If they can match even a portion of the first film's energy, this will be worth the price of admission.

6. Valerian and the City of a Thousand Planets
When: July 21, 2017. Why I'm looking forward to it: Luc Besson, who directed The Fifth Element among other films, is adapting this from a French comic book (see the image above) that is wall-to-wall awesome. I have high hopes.

7. Wonder Woman
When: June 2, 2017. Why I'm looking forward to it: Because the first trailer looked solid. I hope that the final film can deliver, because Wonder Woman is long overdue to join the pantheon of superhero film gods.

8. Kong: Skull Island
When: March 10, 2017. Why I'm looking forward to it: Until I saw the trailer for this film, I was not sold on it at all. Then I saw something that looked like Apocalypse Now with a giant freaking gorilla. Back on board.

9. John Wick: Chapter Two
When: February 10, 2017. Why I'm looking forward to it: I saw the first John Wick by accident, as I'm sure most people did. And it was amazing. I'm ready to watch this guy dismantle more people.

10. Justice League
When: November 17, 2017. Why I'm looking forward to it: OK, DC has given me no reason to hope. Still, Ben Affleck is a great Batman and I am holding out hope that Warner Bros. can right the ship.

11. Logan
When: March 3, 2017. Why I'm looking forward to it: The first Wolverine movie was awful. The second one was pretty good. This one has a good trailer and is based (very loosely) on a good story arc. Will it send High Jackman off in style? I certainly hope so.

12. War for the Planet of the Apes
When: July 14, 2017. Why I'm looking forward to it: Because the first two films in this reboot Apes series were great for completely different reasons, and the human-vs.-ape dynamic they've established is an interesting one. I hope we get another film that is nothing like its predecessors and yet continues to move this universe forward.