Save the drama for Obama!

For a long time, I have noticed that the decor at the White House has changed since BHO moved in. The Oval Office is now stripped of the traditional Middle Eastern wallpaper, drapes and decor and replaced with unremarkable styles. The hallway that he walks out of to talk to the press no longer has Middle Eastern chairs, drapes, etc. And the thing that has bothered me the most is the bright red, white and blue flag behind him every time he speaks from the White House. It has stars and stripes on it and has been there from the beginning.

What is missing at Barack Hussein Obama's press conference? 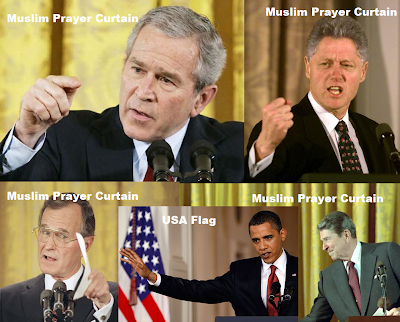 No it is not the teleprompters. See the other presidents' pics for a clue.

And I don't believe it was just an accident! It is intentional. So I ask, why is it intentional? He told you he would change America, didn't he?

P.S. - Because I have learned that only half of the people in the world understand sarcasm and tongue-in-cheek humor (which is at least 90% of this website), I want to specifically point out that the above is both. And if you in any way subscribe to the "Obama is a Muslim" camp, you need to get your head out of your ass. Feel free to hate the man all you want on policy issues, but stop attacking him on baseless nonsense. Also, stop being racist.