The bowl is half empty - part 4 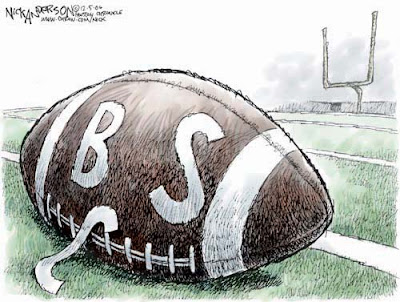 Congratulations to the Alabama Crimson Tide, winner - for the second year in a row - of Monday night's so-called "National Championship Bowl" and holder of this year's mythical NCAA football crown. I say "mythical" because, while I believe they have a good claim to the title, for some reason we still don't have a true playoff system to definitively settle the matter. So, as I have done for the past three years, I'd like to imagine a world in which we had been treated to a month of playoff-level excitement. A world where we had gotten to see 16 of the season's top-ranked college football teams battle for the ultimate, indisputable title.

Here is what it might have looked like. I have bracketed and seeded the teams according to their final regular-season BCS rankings, with some consideration given to tradition (e.g., SEC champion in the Sugar Bowl bracket) and geography. I also used the rule of no more than one team per conference in any given bracket.

Rose Bowl: Oregon over Kansas State. This was what actually happened in this year's Fiesta Bowl.

National Championship Bowl: There was no doubt 'Bama was going to win the National Championship this year. But just think: if Ohio State wouldn't have been on probation, they would have been undefeated and Alabama wouldn't have even been in the championship game. Once again, the BCS manages to just squeak one out by the skin of its teeth! Then again, if we had actually gotten to see this play out, I wouldn't have been surprised in the least to see Oregon or Georgia win the big game. Ohio State might have even been in the mix if they had been allowed to play. And you never know what Cinderella would have started dancing if only there had been a ball. The only team we know for certain wasn't up to the challenge was Notre Dame. Sadly, for this season at least, we'll never know how the rest would have fared.

BONUS: The "N.I.T." of College Football

As I did last year, I also showed what a second-tier 16-team tournament might have looked like. I've included all of the conferences champions without a spot in the main tournament (C-USA, MWC, Sun Belt and WAC), as well as the next-best available teams according to the BCS rankings and AP poll.