Ding-dong, the Emperor is dead!

As it turns out, that six-film series George Lucas made called Star Wars was semi-autobiographical. It wasn't immediately obvious, because the beginning of George's real-life arc syncs up with prequels that began decades later, but here at the end it all makes sense. 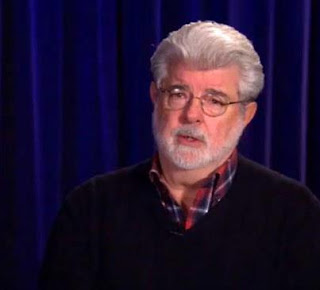 In George's tale, he shows how a young, hot-shot director (young hot-shot Jedi Knight) does things no one else has ever done before and promises to create the greatest movie franchise in the history of Hollywood (bring balance to the Force) only to suddenly sell out (turn to the Dark Side) and mass-murder the childhood memories of fanboys everywhere (mass-murder youngling Jedi everywhere). In the service of his dark master (money), he creates his own company (Death Star) and exerts iron-fisted control over his financial (Galactic) empire, crushing all hope with his ass-clown excuses for storylines (evil Sith powers) and ridiculously CGI-happy animation team (ridiculously incompetent stormtrooper army).

This week, after he was too old and tired to have any fun with it anymore, he finally looked at us with his own, human eyes, saw the error of his ways and repented, saving his own soul in the process, overthrowing the evil empire he helped bring to power and restoring hope to fanboys (Galactic citizens) everywhere.
Yes, like all of you, I naturally harbor a lot of resentment towards the guy, even if, to extend the analogy (uncomfortably at this point), he is the father of all my hopes and dream. But I have been studying the Star Wars franchise ever since my dad (some “crazy old wizard”) first handed me a movie ticket and a bucket of popcorn (a lightsaber and a blindfold) in 1977. And I always believed there was still some good in him. After all, this is the man who invented (befriended) Wookiees. The man who put Princess Leia in a metal bikini when I was 12 (wooed Princess Amidala when he was 12). So he couldn’t be all bad, he just couldn’t.

And this week he proved it. So where does Star Wars go from here? Well, the spirit of Lucas (Vader) will continue to loom large over the franchise (Galaxy) going forward, but there will be new people charting its path now, and hopefully the fans' voices will be heard. They may make some mistakes along the way, but this is definitely what we’ve waited for all these years. Right now fanboys everywhere (the Rebellion) are in disarray, divided over what direction to continue and how to clean up the mess. But at last the fight is over. He has given us the chance to begin again. Let’s not let his sacrifice be in vain.