Most anticipated splody movies of 2004: recap 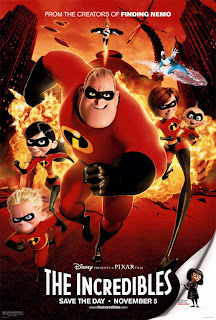 Result: FULL OF WIN (Tomatometer 85%). Not for the faint of heart, but this two-part action extravaganza was classic Tarantino, referencing every b-movie and pulp magazine trope imaginable, but always with a new spin. Vol. 2 lived up to the expectations set in Vol. 1 and then some.

Result: FULL OF WIN (Tomatometer 93%). I still hate Kirsten Dunst in her role as Spider-Man's love interest Mary Jane Watson, but this was even better than the first one.

Result: FULL OF WIN (Tomatometer 81%). Probably the weakest of the trilogy, but still a thrill-ride from start to finish.

Result: FULL OF WIN (Tomatometer 81%). What a strange premise: the Allies discover a demon child summoned by occult Nazis in WWII, and he grows up to be a gun-toting paranormal investigator who teams up with a fish-man and a woman who starts fires (often accidentally) with her mind. But it works, and well, thanks to an exciting and often humorous script and director Guillermo del Toro's full embrace of the weirdness of it all.

Result: EPIC FAIL (Tomatometer 58%). Please, Will Smith, please make an interesting movie again. What should have been on my list: National Treasure (Tomatometer 44%). Don't let the mixed reviews scare you away - the critics didn't get that this movie was supposed to be ridiculous. (I mean, seriously, a treasure map on the back of the Declaration of Independence?) Audiences did.(The audience score on Rotten Tomatoes is 78% positive.) More importantly, so did star Nicholas Cage, turning in a frenetic, almost-but-not-quite-over-the-top performance. Eat your heart out, Dan Brown: this was everything The Da Vinci Code wanted to be and wasn't.

7. Sky Captain and the World of Tomorrow

Result: MIDDLING (Tomatometer 72%). I really wanted to like this retro-futuristic homage to 1930s and '40s serials more than I did. It was still OK, though.

Result: MIDDLING (Tomatometer 55%). There were some good scenes and the plot wasn't bad, but it just didn't hold my attention. I like my Greek myths a little more mythical.

Result: EPIC FAIL (Tomatometer 22%). A boy can always hope. What should have been on my list: Shaun of the Dead (Tomatometer 91%). This is both a parody and a sincere zombie flick, and it works on both levels. If that sounds appealing to you in any way, you'll find this to be brilliant.

Final tally for my 2004 predictions: five winners, three losers and two movies that were just so-so. (65%)
Posted by Rico Detroit at 6:00 AM