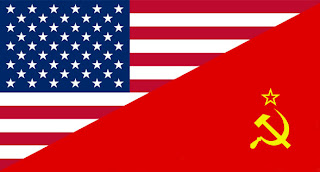 There are a lot of people who point to Ronald Reagan’s speech at the Brandenburg Gate in West Berlin on June 12, 1987 as the turning point in the Cold War. “Mr. Gorbachev, tear down this wall,” he said to rousing cheers. A little more than two years later, the Berlin Wall was history, and the Soviet Union dissolved four years after that. Democracy had triumphed.

While there is no overstating the importance of Reagan’s speech, however, it certainly wasn’t the first sign we had that decades of Soviet resolve against personal freedom were fading. Through the steady advance of technology, the world was becoming a smaller place, and it was becoming ever more difficult for Soviet censors to curtail the voice of unrest in their own midst, especially in the Baltic states and other outlying territories.

It was against this backdrop that the Soviets first began to institute the policies of perestroika (reform) and glasnost (transparency) in the mid-1980s. Rather than appease citizens, however, the new openness allowed a now freer press to critique the shortcomings and hypocrisy inherent in the system. While most Soviet citizens still supported the Union, the voice of dissent was growing louder and picking up steam.

In the past, Soviet hardliners would have seized the opportunity to come down hard on citizens and squash any opposition. However, that was no longer possible: the genie was already out of the bottle, and glasnost was picking up steam. Instead, the Soviet government decided to quiet dissent by reinvigorating national pride within the populace. To do so, they launched a massive propaganda campaign, turning to an old trick in their playbook: beat the United States.

From the beginning, the Soviets had matched the U.S. in military might, but both sides knew that in the nuclear age that was not an acceptable battle field, so they tried to one-up each other in other ways. The Soviets had taken the technology lead in the early 1960s by putting the first man in space (Yuri Gagarin on April 12, 1961), but the Americans were never far behind, and after the U.S. became the first to put men on the Moon in 1969, the space race became a symbolic dead-end. Likewise, the mech tech race in the mid-‘60s cooled before it had really begun, as the Stark and Vanko models both proved potent yet overly-complex and cost-prohibitive compared to conventional weaponry and nuclear deterrents. And unbeknown to the Americans, with other concerns looming, the Soviet government had quietly declawed their technology R&D spending.

But athletics and bio-medicine were areas in which they continued to excel, and in which Soviet leaders believed they could gain significant moral victories over the Americans. Having lost the men’s Olympic ice hockey finals to a supposedly inferior U.S. team in 1980, there was a bit of hurt ego playing into the equation. The Americans’ boycott of the summer Olympics that year and subsequent Soviet boycott of the 1984 Olympics had only caused the U.S.S.R. to further lose face. Seeking to change that, the Soviets decided to hit the Americans hard on their own soil.

Such a move was a risky one, of course, as there is no way to control the outcome of any sporting event. However, in this case, Soviet leaders were as certain as they could be about their chances to win. An agency led by one of their top athletic officials, Nicolai Koloff, had developed undetectable (at the time) anabolic steroids that were capable of bestowing almost superhuman strength and endurance. Koloff had also taken to training one of the country’s most promising young athletes, Ivan Drago, who in 1980 had won a largely uncontested Olympic gold in boxing. With Koloff’s help, Drago was trained – and enhanced – to peak condition.

Drago, of course, is best remembered as a villain: the man who killed popular former heavyweight champion Apollo Creed in the ring in his only fight on American soil, and subsequently lost to reigning heavyweight champion Rocky Balboa on Christmas Day 1985. After that fight, he fell from national hero to villain even among his own countrymen. After a post-game report was released identifying “super soldier” steroids in his system, he was disqualified from international competition and disappeared into anonymity, never to be seen again. (Unless you believe wild Internet rumors that he turned KGB and was involved in that disgraceful business in Namibia in 1988.)

But I think it is worth looking back at what Drago represented in the larger context. Although his country turned its back on him, they did not turn their back on what he stood for. His fight with Balboa is the stuff of legend. It ended the Italian Stallion’s career (save for a single, spectacular exhibition outing at age 59 in 2006), but not before he gave the fight of his life. At the end, the crowd was cheering “Rocky! Rocky!” as they embraced the fighter from Philadelphia the same way they had started to embrace the values set forth in Philadelphia two centuries prior. Even Soviet General Secretary Mikhail Gorbachev was seen begrudgingly clapping after the American’s win and heartfelt plea at center ring that “We can all change!”

While the reactions of Gorbachev and the crowd were mostly censored from Soviet television, that only made them more legendary. Interestingly, though, they did not censor the reaction of Ivan Drago when the crowd turned against him. In the waning moments of the fight, Drago was seen pushing Koloff aside and shouting, “I win for me! For me!” The Soviet leadership, blind to the mood of their own people, allowed this quote to be aired repeatedly, hoping it would vilify Drago as someone detached from his own people, thereby deflecting blame for the loss onto his shoulders alone.

In retrospect, however, it was clear that this was the moment Drago stopped being a pawn of his evil government and started representing his actual countrymen rather than the people who claimed to speak for them. Yes, his cry of “I fight for me!” was the most democratic thing ever heard from behind the Iron Curtain. It reflected a growing sentiment among his people: that their will was not subservient to that of the government, and that their voices deserved to be heard.

Ivan Drago lost the biggest fight of his life, but in doing so he helped win the Cold War – for everyone. 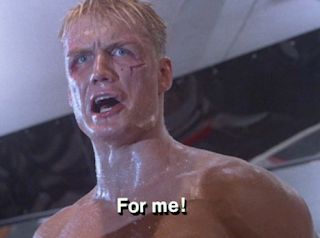