If the mascots ruled the NHL 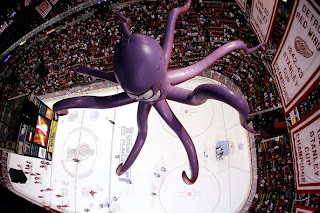 I stand by my previous suggestion for realigning the National Hockey League. But since I rearranged MLB, NBA and NFL teams thematically, I thought I shoudl do the same for hockey.

Pond Division: Canucks, Ducks, Islanders, Penguins, Sharks
These team names all have a water theme, fitting for a game played on a frozen pond.

Shinny Division: Avalanche, Flames, Hurricanes, Lightning, Maple Leafs
Shinny is hockey in its pristine form, played out in the open on a frozen pond. These team names represent other things you'll find out in the natural elements.