If the mascots ruled the NFL 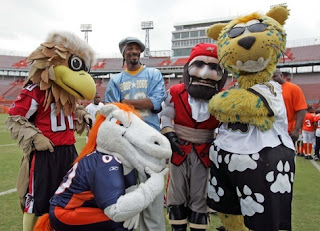 As we head into the final weeks of the season in the National Football League, I figured I would rearrange the league much as I did with the NBA and MLB.

This is completely unnecessary, since the NFL is the best organized pro sport in America. But then again, when has something being unnecessary ever stopped me before?

Sea Division: Buccaneers, Raiders, Seahawks, Vikings
These nautically themed teams are ready to sail to victory.
Posted by Rico Detroit at 6:00 AM