If the mascots ruled the Major Leagues 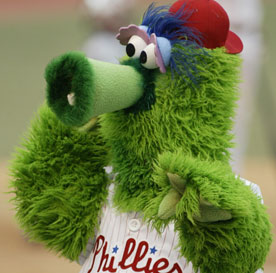 Major League Baseball recently decided to move the Houston Astros franchise from the National League Central division to the American League West. It's not the best move they could have made, but it does even things out a bit.

Still, Houston has always been a National League town, and in baseball, that kind of tradition is a sacred thing. The move is also unsettling, because it requires interleague play every day of the season.

Then I got to thinking: well, why not just throw all tradition out the window. And so I did just that, rearranging the leagues along thematic lines. (If this seems to fly in the face of geographic sense, just remember that Atlanta and San Francisco were in the same division for decades.)

Wild Division: Cubs, Diamondbacks, Marlins, Rays, Tigers
These teams all use wild animals as their mascots.
Posted by Rico Detroit at 6:00 AM