It's not about the shield 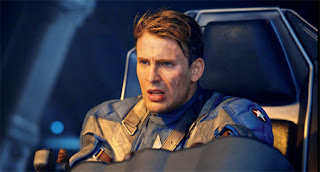 Other than Superman (which debuted in 1938) and Batman (1939), Captain America (1941) is the oldest comic book hero we've seen made into a blockbuster movie yet. And while, like the other two, he's undergone a lot of changes and been updated for modern times, the new Captain America movie is the first to make the decision to set its hero in the era of his creation. After watching the movie, it's not hard to see why.

At their core, the golden age superheroes were idealistic embodiments of simple values like truth and justice. If the formula was at times overly silly and simplistic, those underlying values were strong enough to make these heroes icons. Later superheroes would gain more depth and complexity, which led to a whole different kind of storytelling. But even as we grew more cynical and our heroes grew more flawed, those underlying ideals were the real engine behind not just superheroes but every kind of hero - cinematic or otherwise - that our culture created.

Back in the World War II era, there were less shades of gray: we were at war, and our enemy was truly evil. To combat that, we needed ideals and heroes that were truly good. And it is against that backdrop that Captain America is set. And because of that setting, we can put our modern cynicism aside and appreciate goodness and heroism for what they are.

And there is no one that better embodies goodness than Captain America. He may have a patriotic name, but early in the film it is made clear that it is his sense of right and wrong that makes him who he is, not blind patriotism. Chris Evans plays Captain America, whose real name is Steve Rogers, and turns in a wonderful and convincing performance. Rogers begins the movie so scrawny and weak that he is rejected by the army despite trying over and over to join so he can help the war effort, which he sees as his duty. As weak as he is, he is fearless and determined to do everything in his power to help. Eventually, he gets his chance thanks to an experimental procedure that transforms him into peak human physical condition.

Captain America is stronger and faster than normal people, but much weaker than most superheroes. Director Joe Johnston said that they tried to keep him grounded by capping his abilities at "the best Olympic athlete plus 20 percent." But it's not what he can do that makes Captain America a hero - he was already that before the transformation. The "super soldier serum" just gave him the ability to do what he was born to do. For me, the opening act of the film was the best, because the story was so strong. You really root for scrawny little Steve and cheer when he gets the chance he deserves.

But that victory doesn't last long, as the villains soon attack and Captain America has to prove his mettle. The second act is a bit choppy - they cover a lot of ground (three years by my reckoning), and at times it causes you lose some connection to the story. But that isn't to say it isn't interesting. Certain scenes are priceless, such as when Captain America uncomfortably agrees to join a USO stage show. (Trust me, it sounds dumb, but it's a charming segue.) And even though things are blazing by, we do get certain essential details. My one real complaint is that a scene that should have been poignant goes by so fast that it doesn't really register emotionally. 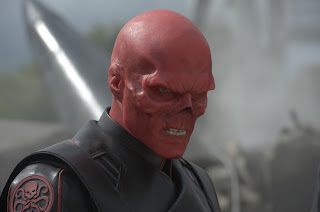 The third act is the final confrontation between Cap and his arch-nemesis, the Red Skull. Hugo Weaving is wonderful as the power-mad evil genius, who is even creepier and evil than he looks. The movie does a wonderful job of setting him up as the ultimate bad guy, even more powerful than the Nazi regime that he abandons, and shows that he has the power and just enough crazy to take over the entire world if not stopped. He's such an awesome bad guy that I wish this movie would have been at least half an hour longer and all of that would have been Red Skull screen time.

Without giving too much away, I'll just say that there was genuine emotion in the final act. It was exciting to be sure, but even more than that it was good storytelling. And while his enhanced strength and agility helped get him there, in the end it is what's inside Steve Rogers - that selfless goodness - that saves the day.

The bittersweet epilogue is far too brief, but brought a tear to my eye. And the post-credits scene made me excited for the next chapter to the marvel saga next May. By the way, those who complain about this movie being a commercial for The Avengers really missed the point. These Marvel movies are all chapters in a larger saga, but they also really stand on their own. And perhaps none more so than this one.

The special effects were good, but downplayed. The set designs were gorgeous. There were subtle nods to Star Wars and Raiders of the Lost Ark (two franchises where Johnston cut his teeth as an art director in the '70s and '80s), as well as Easter eggs for loyal comic book readers. And the supporting performances were all really, really good. In the end, this was a feel-good summer movie, heavy on action and escapism, but with a compelling story underlying it all. And a character that represents the best in all of us, American or otherwise.

Captain America is the best superhero movie since the first Iron Man. My rating: ***** five stars (essential). Go see it! (In 2D, of course.)