Steal this idea, Hollywood: Not your average nightly news... 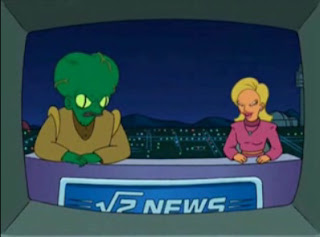 Here is an idea I have for a weekly television program. Call it "The National News" and make it look exactly like a network nightly news show. In the beginning, actually have the anchors cover some ordinary news that happened that day. but also mix in a bunch of weird stuff, saying things like: "Authorities aren't sure what caused..." Some of it is really freaky and thought-provoking.

Over time, we get more "amateur footage," some investigative journalism and competing theories about these strange phenomena. Including some interviews with crazy scientists (one with theories about aliens, another about government conspiracies, etc.), nutty religious leaders calling it the apocalypse, etc. Also, we get some clips of the President talking - out of context, of course. Other famous people could cameo as themselves. Overall, production costs are kept kind low, because the special effects need to look grainy to be mysterious.

Then (during sweeps) we get lucky and some clear footage emerges, and we see that's it's... superheroes! Or aliens! Or, what the hell, both! And let's throw in some robots while we're at it. And a zombie plague. And somebody who brings dinosaurs back to life. And... well, you get the point. It's some very wild stuff, and it's actually happening and building in momentum, and the world is turning into a comic book right before our eyes.

Eventually, it becomes what the news would be every night if the world became that crazy. We get summaries of the amazing things happening in the world. And we get to see breaking footage as something heroic is happening. We get to know the characters that save the day as the news cameras capture them in action, and maybe even get them to sit down for an interview. But it's all told from the everyman point-of-view: how you and I would react if this shit was real.

Full disclosure: this idea borrows heavily from Kurt Busiek's Marvels (beautifully illustrated by Alex Ross), but that was a great comic book mini-series. And I think the concept would make a great TV series. Step up, Hollywood!