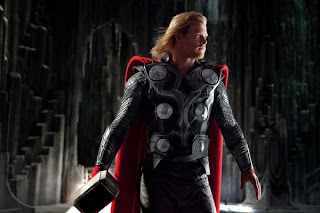 In the 1960s, Marvel Comics made some really low-rent cartoon series of its major superheroes. Growing up in the 1970s, I got to watch re-runs of those cartoons every day after school. Spiderman, my favorite, was on every day, and was followed by one of five different superheroes, depending on the day of the week: Captain America, Hulk, Iron Man, Sub-Mariner and Thor.

I don’t remember which day Thor was on, but I know that it was my least favorite day. (Although it did have the best theme song!) To me, even as a kid, Thor was kind of ridiculous. He is based on the Norse God of Thunder, and in those cartoons he talked as if he was quoting from the King James Bible, with a lot of “thee’s” and “thou’s” and other archaic terms thrown about.

So when Marvel Studios announced that they were making a Thor movie, I had serious reservations. As Thor was a necessary stepping stone to getting Iron Man, Captain America and Hulk together on the screen in next year’s The Avengers, however, I tried to keep an open mind.

Then I heard that Kenneth Branagh had been brought on board to direct, and I started to see trailers and stills from the set, and I started to get genuinely excited. Now, I have finally seen the film, and I am happy to report that it is good. Not Iron Man

good, but pretty close. It is a fun movie from start to finish, and while it requires a heftier than usual suspension of disbelief, it is so good-natured and such a well-told story that you will willingly do so. Best of all, Thor doesn’t say “thee” or “thou” once!

So here is my movie review quote for the back of the Blu-ray packaging: “There is a lot to like about this movie… Chris Hemsworth shows outstanding range… really well done and engaging… a fun movie from start to finish…”

And here is my quote for the haters: “Low-rent cartoon… kind of ridiculous… doesn’t really have time to pull all the threads together… wasted opportunity…”
Posted by Rico Detroit at 6:00 PM