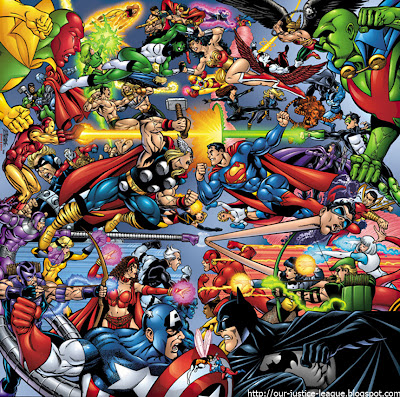 About three years ago, my then five-year-old son went superhero crazy. It only lasted a few months before his attention turned to Pokémon or some other nonsense, but in that short time it was non-stop superheroes. Every night he would have me read to him from two giant superhero encyclopedias someone had bought for him: one detailing all of the DC heroes and villains (Superman, Batman, etc.), and one with all of the Marvel ones (Spider-Man, X-Men, etc.).

Just as with dinosaurs a while earlier, my son’s obsession re-introduced me to a favorite childhood diversion that I hadn’t given much thought to since. And in that short time, I learned far more about superheroes than I had ever learned from a few comic books and Saturday morning cartoons as a kid. Then, shortly afterwards, I saw the movies Iron Man and The Dark Knight, which opened up a whole new level of interest in the absurd but fun world of men who fight crime wearing tights and capes.

As I was reading to my son, I noticed that there were a lot of similarities between the two main camps – DC and Marvel. Both universes have heroes that shrink, heroes that stretch and heroes that scream really loud, just for starters. And so I began talking notes, because that’s what I do. Recently, my son started watching the Marvel Studios movies with me (Thor is now his “favorite movie of all time!”), and I dusted off those notes from three years ago. With four major superhero movies coming out this summer (Thor, X-Men, Green Lantern and Captain America), it seems like the right time to have some fun with it. So over the next few posts, I’ll show the results: a series comparing DC and Marvel versions of the same basic archetypes, with one question in mind: which company has the cooler version? 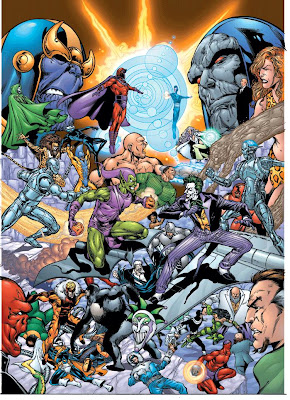 I’ve divided the posts into eleven loosely related groups of ten contests each. It was supposed to be ten groups of ten for an even one hundred, but rather than making hard decisions of who to discard, I took the easy way out and added an eleventh group. Still, there are many heroes and villains missing: I couldn’t get them all, but I did try to include all of the most popular ones as well as several of the more obscure ones.

Along the way, I'll consider such things as which hero is classically coolest (has the best "look"), which is the most badass (has the most intimidating presence), which has the most firepower, which has the most heart, and which is the most compelling character (has best chance for good storytelling). The overall winner will be the one that most lives up to these qualities and all of the other intangibles that make a superhero "cool."
So stay tuned: for the next several days, it’s DC vs. Marvel, and if it’s not quite a fight to the death (because no one ever stays dead in comic books), it’s at least a battle for pride. We’re going to once and for all determine who’s cooler: DC or Marvel?