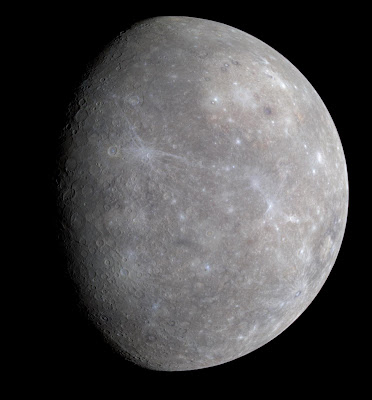 Mercury is the closest planet to the Sun and the smallest of the eight dominant planets in our Solar System. It is actually smaller in diameter (but not mass) than the two largest moons (Ganymede and Titan), making it the tenth largest planet overall.

Mercury is one of seven planets visible to the naked eye (the others are Venus, Earth, Luna, Mars, Jupiter and Saturn), and so it has been observed since ancient times. The Assyrians called it the “Jumping Planet,” while the Babylonians named it “Nabu” after their messenger god. The ancient Greeks at first thought it was two different planets, calling it “Apollo” (the sun god) when visible in the morning and “Hermes” (the messenger god) in the evening, before settling on the latter name for both. The planet’s official name comes from the name of the Roman messenger god (Latin: Mercurius), who was modeled after the Greek god Hermes. Many cultures continue to use some variation of a different traditional name for the planet, though, including: “Otaared” (Arabic), “Budha” (Sanskrit) and “Star of Water” (Chinese). Mercury is also nicknamed the “Swift Planet” because it moves so quickly around the Sun.

Mercury is a size-H (small terrestrial) planet with a mean diameter of 4,878 km (3,031 miles). Its surface area is about 15% of Earth’s total, or about 50% of the Earth’s dry land. Its mass is about 5.5% of Earth’s. The planet’s differentiated interior consists of a large, molten metallic core surrounded by a mantle and crust made of silicate rock. Mercury’s core is 42% of its total volume, the highest percentage of any of the terrestrial planets (Earth’s core is 17% of its total volume). This gives Mercury more mass than other bodies of similar size, as well as providing it with a magnetosphere that provides some protection from the Sun’s radiation. Gravity on the surface is 37.8% of Earth’s, equal to Mars’ gravity and about double that of the Moon.

Mercury’s surface is heavily cratered, like our Moon, and shows no sign of recent geological activity. It has only a tenuous atmosphere, most of it having been ripped off by the strong solar wind it experiences. Because it has no appreciable atmosphere, the difference in temperatures is extreme: ranging from -190°C (-315°F) on the side facing away from the Sun to 430°C (800°F) on the sunlit side at its closest approach. Despite this swing, scientists believe there may be water ice at Mercury’s poles, hidden in craters that are deep enough that they are never exposed directly to sunlight.

On average, the Sun appears 2.5 times larger and 6 times brighter on Mercury than it does on Earth. Venus also appears much brighter in the sky than from Earth, and the Earth and its Moon are also prominent. Mercury has no natural satellites of its own.

Mercury is locked in a 3:2 spin-orbit resonance, meaning that it rotates exactly three times on its axis for every two revolutions around the Sun. The net effect of this from the perspective of someone on the planet is that a day on Mercury (176 Earth days) lasts exactly twice as long as the Mercury year (88 Earth days).

Mercury’s orbit around the Sun is the most elongated of the major planets (eccentricity 0.20563, where 0 is a perfect circle and 1 is no longer a closed loop), giving it greater extremes in its closest and furthest distances from the Sun: 0.31-0.47 AU. (An AU, or astronomical unit, is the average distance from Earth to the Sun.) Its average distance from the Sun is 0.39 AU – roughly 58 million km or 36 million miles. Its orbit is also slightly inclined (6.3°), meaning that the plane of its orbit rises a little above and dips a little below the other major planets. 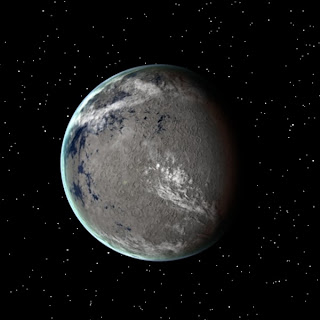 To date, Mercury is the least-well studied of the major planets, in part due to its close proximity to the Sun, but that is about to change with the arrival of the MESSENGER spacecraft, which did its first fly-by in 2008 and entered orbit around the planet earlier this year (March 18, 2011). The only previous spacecraft to visit was Mariner 10, which made several close approaches in 1974-75 and mapped about half of the planet’s surface.

Despite some substantial obstacles, Mercury may prove to be one of the easiest planets to colonize in our Solar System. Initial domed cave colonies would be established at the polar regions, using technology developed for colonizing the Moon and Mars. Water would be extracted from polar ices and oxygen could be obtained from the planet’s existing, trace atmosphere and mineral deposits. Solar energy would generate ample power for heating, cooling and other needs, while the abundance of iron and other mineral resources would provide an economic base. Colonies on Mercury would be an ideal source of materials for the complicated process of terraforming Venus.

Eventually, through the use of orbiting heat shields, it may be possible to terraform the entire planet. Maintaining an atmosphere would require constant attention, but doing so would provide protection against meteor impacts. The planet’s long day and eccentric orbit would still lead to temperature extremes, though, making weather patterns harsh and life difficult outside of the polar regions.

The native sentient species is known as the Apolloids. Like other Mercurian life forms, they have long, low, segmented body forms (half a meter high and up to three meters long) slightly reminiscent of centipedes, but tapered so they are wider and slightly thicker near the head. The head end contains sensory organs, mouths (for feeding only) and multiple, skinny appendages that they use like fingers. They communicate entirely by sign language and lack any kind of ears, although they can detect low-frequency vibrations. They have multiple sets of eyes that see different wave lengths, and each are protected by multiple layers of radiation-proof exoskeletal “eyelids.” The multiple, dense layers of exoskeleton that cover their bodies serve multiple purposes, shielding the Apolloids from the elements while absorbing solar energy for photosynthesis.

Beneath the exoskeleton, their bodies are quite delicate and they are unable to live in higher gravity environments like Earth. They are warm blooded and insulated by a thick layer of fat. Feathery “gills” run the length of their bodies and filter oxygen and water vapor from Mercury’s thin atmosphere as needed. Multiple air bladders recycle oxygen and carbon dioxide for aerobic and photosynthetic processes. Apolloids subsist on both sunlight and other organisms, making them similar to both plants and animals on Earth. For the organic part of their diet, they raise Mercurian livestock and they grow cactus-like fungi in corkscrew-shaped pit farms. They are also quite fond of treats from Earth, especially pizza.

Apolloids are not highly advanced technologically, but they use tools and have built vast, underground cities. They have complex social behaviors and excel in visual arts like painting and sculpting. They are also fond of low-impact sports like bowling and puzzle games like Sudoku. Slapstick comedy is their highest form of entertainment. Although generally slow-moving, they are well armored and cunning and can be quite dangerous in a fight, which is why the Martians were never able to conquer them. They live about 40-50 years on average.

The polar regions of Mercury are also home to a fair number of Martian transplants.

Images courtesy of NASA, Michael Taylor and MapleStory.
Posted by Rico Detroit at 6:00 AM