Look at all the planets! 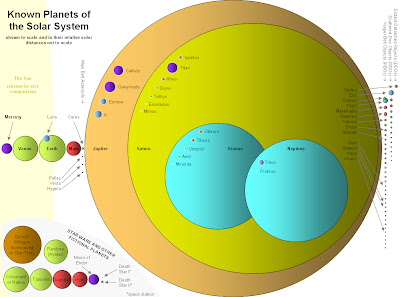 In my last two posts, I argued strongly that all celestial objects smaller than a brown dwarf (the smallest kind of proto-star) and larger than about 600 km in diameter (large enough for most rocky bodies to achieve hydrostatic equilibrium, or a roughly spherical shape) should be considered planets.

In the image above, I show most of the known planets in our Solar System that fit that definition, along with "demi-planets" down to 390 km, and a few fictional planets thrown in for comparison. Objects of the same size class are shown in the same color. Their diameters are shown to scale, but obviously not their distances: as large as these planets are, they are still specks in the vast emptiness of space.

To help illustrate this, the picture below shows these objects at their relative distances. (Note that Sedna is not included - its average distance from the Sun is nearly five times further than the next most distant planet known.) The vertical lines indicate diameter, but in this diagram the lines are not to scale with the distances: even the largest planets would barely be visible at this scale. Some of the lines overlap, because they are very close by astronomical terms - within a few million km of each other. Moons of larger bodies, for example, are the same distance from the Sun  as the planet they orbit, so they are "stacked" in front of the main planet as variations in the line color rather than as separate lines. The Sun is shown as an orange line on the left for position reference only. If it's full diameter were shown, it would be almost 10 times greater than the largest planet (Jupiter).

So far, there are almost 60 objects in our Solar System that are believed to be over 600 km, and there may be hundreds more yet to be discovered. That may seem like a lot of planets, but if you consider that we have already identified over half a million objects that orbit our Sun, with many times that left to be discovered, it is really an elite few.

UPDATE: Here is a really good image showing the relative sizes of every known object over 400 km in our Solar System. 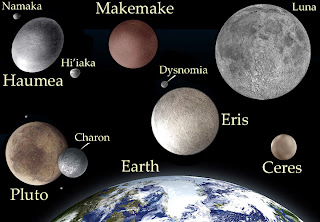