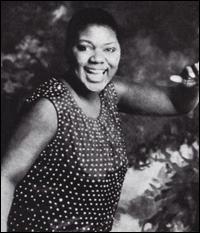 They called Bessie Smith the “Empress of the Blues,” and for good reason. Like most female blues singer of the 1920s, Smith was more of a general songstress than a pure blues artist, and her accompaniment owed more to vaudeville than to traditional blues. But the emotion and power of her singing were pure blues through and through.


Bessie Smith
“Downhearted Blues” (Columbia A3844, 1923)
“Downhearted Blues” was her first hit and is considered by many to be the first authentic blues record. Listening to her sing, it is easy to forget that this was still a purely acoustic recording, without the benefit of an electronic microphone. Her voice is measured, even reserved, as is fitting for the subject matter, and yet such is the power of that voice that no subtleties are lost in the delivery. It is a moving and beautiful performance.

“‘Tain’t Nobody’s Bizness If I Do” (Columbia A3898, 1923)
As powerful as that record is, it almost pales in comparison to “‘Tain’t Nobody’s Biznesss If I Do.” With well-suited accompaniment from Clarence Williams on piano, Smith sings a tale of defiance and self-determination, proclaiming that no one can tell her what to do with her money, body and soul – even as her behavior becomes increasingly self-destructive. Williams knows just when to hold back, as he stops playing momentarily several times in the second half of the song to give further weight to Smith’s words.

W.C. Handy was the first great blues composer, and was responsible more than anyone else for standardizing the twelve-bar blues format that almost all blues songs now adhere to. “St. Louis Blues” is his most famous composition. First published in 1914, it has gone on to become one of the most recorded songs in history. This version, however, remains just about definitive. The song has been slowed down to a crawl and is essentially turned into a duet between Smith’s expressive voice and Louis Armstrong’s melancholy trumpeting. It is a genius pairing, and from Smith’s opening line (“I hate to see the evening sun go down”) to Armstrong’s final flourish, every moment is imbued with powerful emotion from one, the other or both.

The Great Mississippi River Flood of 1927 was one of the worst natural disasters in the history of the United States and would inspire numerous blues songs. While this Bessie Smith song is usually associated with that flood, however, it was actually recorded earlier in the year and likely refers to one of the many smaller floods that happened in 1926. Nevertheless, it seems prophetic now, and struck a chord with the public after the Great Flood hit. As usual, Smith turns in a great performance here. Although she hits high, powerful notes at the beginning of each verse, she generally conveys a subdued tone, and by the end of the song even the high notes have mellowed considerably. James P. Johnson provides the excellent piano accompaniment, which in places sounds reminiscent of falling rain and thunder. 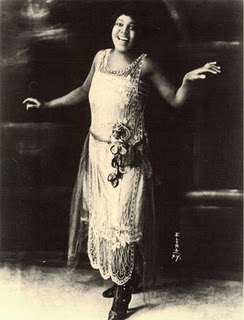 This song is so good it floors me every time I hear it: Bessie Smith, voice strong and expressive as ever, delivers some of the most classic lyrics in blues history. In the beginning of the song, the narrator reminisces about the times when she had money: “I carried my friends out for a good time / Buying bootleg liquor, champagne and wine.” But as she falls on hard times, she finds that her so-called friends cannot be found: “It’s mighty strange, without a doubt / Nobody knows you when you’re down and out.” Every word is simply amazing. For the final verse, Smith repeats some earlier lines, and doesn’t even have to sing all of the words. The story was so memorable and expertly sung on the first telling that she can just hum through most of the line, sing the last few words, and the listener knows what she means. Those hummed lines capture more feeling without words than most songs can ever hope to convey.

“Gimme a Pigfoot” shows Bessie Smith at her rawest and best. Vocally, she pulls out all the stops, hitting the typical highs with her powerful voice, but also unapologetically hitting all the lows with a snarling growl. By the time she sings, “He’s got rhythm – yeah!” there’s no doubt where the song is headed. The rest of the devil-may-care lyrics only add fuel to the fire as Smith calls for not just a pigfoot and a bottle of beer, but also for refer and gin as she demands a good time. The accompaniment reflects the bluesy rowdiness as well, with the lead piano (by Buck Washington) and trumpet (by Frankie Newton) parts played playfully and loose. Newton’s trumpet solo, in particular, is wonderful as it slurs through the meandering notes and slides drunkenly into the final verse. Also providing colorful touches are swing legends Jack Teagarden on trombone, Chu Berry on tenor sax and Benny Goodman on clarinet.

Unfortunately, the November 24, 1933 recording session that yielded “Gimme a Pigfoot” would be Smith’s last. The hard-hit economy and the public’s appetite for newer sounds left her behind, and she was killed in a car crash only a few years later (in September 1937 at age 43).