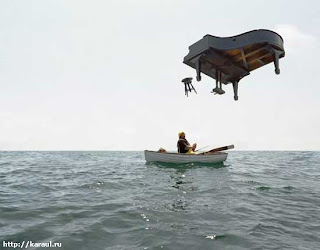 Just about everyone is familiar with the bit of folk wisdom known as Murphy’s Law:


Anything that can go wrong, will.

And many of us add Finagle’s corollary:


…at the worst possible moment.

I got to thinking about this recently and realized that while Murphy’s Law can’t possibly hold true every time, there is a certain undeniable kernel of truth to it. You see, there is a reason that truth is stranger than fiction and that underdogs overcome seemingly impossible odds all the time. That reason is statistics.

When you have billions of billions of people living their lives day after day, hour after hour, even ordinary activities are bound to generate extraordinary results once in a while. And, of course, nothing limits us to ordinary activities. Hence, the Guinness Book of World Records. And the kid you knew in second grade who could blow boogers out of his eyes. And the fact that somebody invented Jello. And all of the things that people do with Jello to get in the Guinness Book of World Records. Including that booger kid.

The next time you hear someone ask, “Can you believe…?” – stop and think seriously about the question for a minute: is it really so inconceivable, given the endless possibilities of our theoretically infinite multiverse?

Indeed, our entire existence demonstrates the principal. Biologically, it is the one-in-a-quadrillion principal that makes evolution possible. Cosmologically, it accounts for the great diversity of star systems, including ours having a planet just right to foster life as we know it. Put them together and – BAM! – no more dinosaurs.

This leads me to a “law” that gets to the heart of why Murphy’s Law is true even when it’s clearly not:


Whatever can happen, will (eventually) happen.

I’m just going to let that one hang out there. That’s an infinite universe truism and as such is difficult to discuss without getting overly conceptual. But here is a variation that applies to the finite universe: that part of God’s creation that we can directly observe and start to comprehend:


Whatever people can do, they will (eventually) do.

By “people” here, I don’t mean that every single person will do every single thing – just as Murphy’s Law doesn’t necessarily come into play in every single situation, even though it seems to. But overall, as a species, I think this law holds more empirical weight than Murphy’s Law ever did and the implications are stunning. Human beings exist to push boundaries. At its worst, this means we get genocide and Flavor of Love. But at its best, we get a cure for cancer and interstellar travel.

Make no mistake: at a very basic level, everything that can go wrong, will – somewhere, somehow. But everything that can go right, will, too. The good thing for all of us is that we are capable of learning, so innovations like crop rotation and transistors don’t necessarily die with the unstable genius that was crazy enough to think of them.

But there is another implication of this law; namely, whether or not something is “ethical” doesn’t make a bit of difference on the large scale: somewhere, someone will do it if given the chance. That means that human cloning is inevitable, and most likely human-animal genetic hybrids and human-robot cybernetic hybrids as well. And a lot of other things that we can’t imagine yet. But we will. And in hindsight, we will call at least some of them “progress.”

Well, at least until we cause the alien robot zombie apocalypse.
Posted by Rico Detroit at 6:00 AM