Evidence of time travel captured in 1928 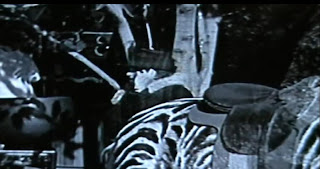 Irish film buff George Clarke recently discovered evidence of time travel in a 1928 Charlie Chaplin film called The Circus. An old woman passes by in the background talking on what is clearly a cell phone. As she talks into the device, she seems to be suddenly caught off guard that she is on film and hastens away. You can view the full video from YouTube below.

Now, I know what everyone is thinking: how can she be talking on a cell phone in an age that had no cell towers? And who is she talking to? There are easy explanations for those questions. In the first place, we're talking about future technology here. Secondly, I think it's safe to assume our time traveler was not alone!

In fact, this probably wasn't an old woman at all, but a future space commando in disguise (look at those man hands!), part of a crack team sent from the future to capture the time traveling alien robot zombies...