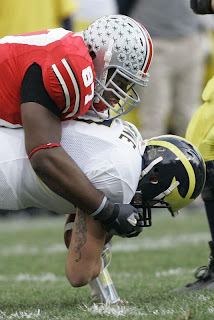 When the Big Ten announced it had added Nebraska and would realign itself into two six-team divisions, the sports talking heads all proclaimed that this was just the first step. Most of them predicted that the Big Ten would continue until it reached 16 teams, and that this would start a chain reaction that would eventually leave five 16-team mega-conferences.

Like all things, these proclamations should be taken with a grain of salt. But if it does go down that way, here is what I think those five super conferences would look like (schools new to a conference are marked with an asterisk*):

The Big Ten is in the driver's seat: they can have just about anyone they want, although Notre Dame is always a wild card. These four new schools are all already on the Big Ten's radar. Rutgers gives them an "in" on the East Coast and is a good fit academically and philosophically. Pitt is a good fit as well (academically and geographically), and also has great football and basketball programs. Notre Dame is a great fit - they practically are a Big Ten team - and if the Big East is no longer around, there is little option for them otherwise. Missouri is a good fit geographically and not bad academically; plus, they're a natural rival for Iowa and Nebraska, and they have a Big Ten quality sports program.

The Pac-8 is reunited in a single division, while the rest of the conference is rounded out by the best of the mountain states schools, plus the two best remaining California schools (all from the Mountain West Conference). This gives the PCC total dominance over the West Coast, with only a few second-tier schools remaining.

After the Big Ten is done raiding the Big East, the ACC gets four of its remaining six football teams. This gives the ACC a stronger toehold in the northeast, not to mention a basketball powerhouse in Connecticut. And at that point, the competitive balance should be kept just fine with a simple North-South split, eliminating the current, clunky "Atlantic" and "Coastal" divisions.

Having lost three schools, the Big 12 looks to absorb the remaining schools in the next-best conference, the Mountain West, which itself has seen a number of schools flee to the former Pac-10. (I left out Air Force and replaced it with UTEP, a good geographic fit, from Conference USA.) This remains a Texas-centric conference, as none of the new schools has enough clout to challenge Austin's dominance.

There you go. It all leaves a bad taste in my mouth, frankly. I'd prefer more, smaller conferences, but I guess there are pluses and minuses either way. And change is inevitable, so... we'll see what happens.

Of course, a little extra tweaking is still needed to turn the Bowl Championship into a real eight-team playoff field...
Posted by Rico Detroit at 6:00 AM