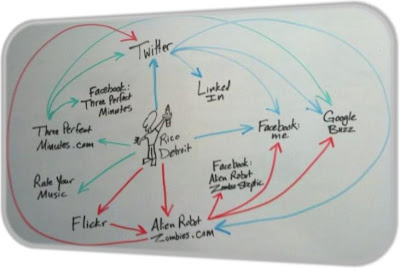 I use a lot of automated feeds to update my websites. Anything I post to Twitter, for example, automatically feeds Facebook, LinkedIn, Google Buzz and my Alien Robot Zombie Skeeptic blog. In turn, headlines from both of my blogs automatically generate tweets on Twitter. To keep track of the circular nature of all of this, I recently mapped it all out.

This is what I came up with. The green lines show the flow of content I've generated about music, the blue lines are personal comments (mostly "yo' mama" jokes), and the red lines are all of the alien robot zombie stuff.

And now that I think about it, the map doesn't show every relationship it should. For example, Flickr actually feeds Facebook and Google Buzz directly. And my record reviews at Rate Your Music now show up on my blogs. But I'm not going to draw the whole damn thing all over again!
Posted by Rico Detroit at 6:00 AM