We've got to go back to the island... 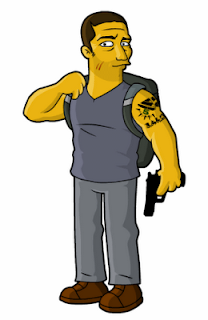 I am not a big fan of television in general, but every once in a while a show grabs my attention. After a friend "boxed-set bullied" me into watching the first two seasons of Lost, I was hooked. And so, after spending the past couple of years catching up and then hanging on every new episode, last night I watched the series finale. It was a bittersweet moment, but ultimately a satisfying one.
Lost was a bizarre show, full of mind-bending twists and turns. It was at times profound and at times kinda silly, but it was always entertaining. To me, the show succeeded most when it was focused on the characters.  When it got too caught up in pseudo-science or mythology, it had a tendency to stumble. (It jumped the shark when the island and its inhabitants went "skipping through time" in season four. It was still good but never quite as good again.)

I was happy to see a strong return to those characters in the finale. The ending was both heartwarming and bittersweet. A tear or two was shed. And it was yet another thought-provoking twist that I did not see coming. On that level, like so many episodes before it, Lost succeeded.

I say "episodes," because that's the true way to judge Lost. There was a narrative there, but it wasn't always a coherent one. Like life itself, the story didn't always go from point A to point B in a straight line. A lot of stuff happened and it didn't always fit together neatly. I have a lot of unanswered questions. What made that string of numbers so powerful? Why was Walt special? Why couldn't women have children on the island?

But each episode worked on its own, and there was enough of a common thread to tie a lot of it together, even if some threads were left dangling. Any Lost fan who didn't like the final episode simply didn't like that it was the last episode. There was much more territory that could have been mined.

One of the recurring storytelling devices the show used was jumping around in time. We had flashbacks for two seasons, then flash forwards, then actual time travel. This whole final season, we had "flash-sideways" to what we thought was an alternate universe / alternate timeline where Oceanic flight 815 had never crashed on the mysterious island.


**SPOILERS BELOW**
It turns out that the alternate universe was some kind of spiritual limbo, similar to Purgatory. I've heard some people say that what happened in that alternate world was a waste of time this season, that it didn't matter because everyone was already dead. I disagree. Each one's experience in that world was based on the unfinished business of their life. We got to see these characters that we'd come to know so well wrestling with their unconscious fears and finally overcoming them - finally "letting go."

In the end, it was never about what the numbers meant; it was about the characters. And it was nice to see them find the love and peace that eluded them for so long. Once again the writers found a way to challenge our perspective. It was good television and a fitting end.


Lost was an ambitious project, and it didn't always work, but I'm glad I went along for the ride.

P.S. - Although the creators say Lost is done forever, it would be easy to make a sequel. Very, very easy. And it will happen. I'm not condoning it, and I'm not saying it would be as good as the original, but it will happen.
Posted by Rico Detroit at 6:00 PM