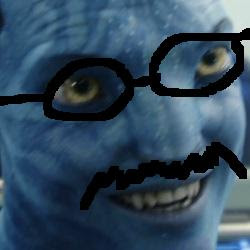 I saw James Cameron's Avatar yesterday, and it was a huge disappointment. I certainly didn't expect it to be able to live up to the over-the-top, "best-thing-since-Star Wars" hype, but I also didn't expect it to suck as thoroughly as it did. Fail, fail, fail.

I would give it three stars *** (worthwhile), but only barely. If the novelty wears off as I suspect it to, I'll drop it to two stars ** (tolerable). In any case, I would recommend waiting for video. ("But wait," you say, "don't I need to see it in 3D?" You don't need to see anything in 3D!)

On the plus side, the special effects were good and some of the action scenes were very well done. I like Sam Worthington as an actor, too, and he did a good job in this movie despite the thin script.

The CGI was good - better than anything previous - but it's not the tremendous leap forward that it was hyped to be. At the end of the day, it still looks like a glorified video game. The motion capture thing has been done before, and I thought Who Framed Roger Rabbit was a bigger technical leap forward in marrying live action and animation.

Maybe I would feel different if the story were worth watching, but that is where this movie really falls apart. It is a three-dimensional movie with one-dimensional characters and a a one-dimensional plot. Here are my complaints (SPOILERS!):
So here is my movie review quote (for the back of the Blu-ray packaging): "best-thing-since-Star Wars... I would recommend... very well done... technical leap forward... unbelievable."

P.S. - Want a second opinion? Click here for a rant from Red Letter Media.
Posted by Rico Detroit at 7:45 PM