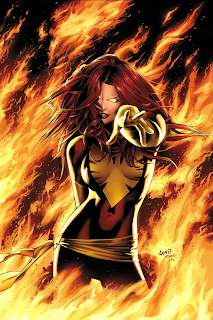 I've written before in this space about how disappointing the third X-Men movie was after the epic brilliance of the first two. Recently X2 screenwriter Michael Dougherty, who did not work on X3, explained what he would have done differently. His vision is certainly preferable to the horrible mess that was X3. However, I have my own take on how the movie franchise should have progressed...

First of all, I don't think the Phoenix should have been the subject of X3 at all. The movie should have included some teasers that ultimately set up her return in X4. Meanwhile, X3 could have been about everyone coping with Jean Gray's loss and trying to make sense of it all. That kind of human drama worked well in the first two movies, and this would have been a nice twist to the basic formula for X3.

I like the idea of Cyclops' grief driving his obsession to make the team stronger, and watching him become the hard-ass perfectionist that he is in the comics. I also think Wolverine could have gone to a very dark place, questioning his place with the team and his respect for life. Despite squabbling and inner torment, the team emerges stronger at the end to overcome a new, more direct and deadly threat. Let Magneto take a rest, incapacitate Professor X for a while, and let the X-Men open up some real firepower at the end. Also, resist the urge to incorporate too many new mutants: there are enough aspects still to explore in the ones we've already met.

All of that sets them up for the even bigger threat of the Phoenix in X4. In that movie, the X-Men are at the top of their game but still unable to defeat Jean Gray, who has returned mysteriously from her apparent death at the end of X2. Now she exhibits almost god-like powers, but also a dark side to her personality that is spiraling out of control. The whole movie is about her struggle to maintain her humanity in the face of unlimited power. At the end of X4, the gentler side of Jean's personality has almost completely been lost and the "Dark Phoenix" side is in control. Finally, in a moment of clarity she realizes what she has become and has a glimpse of what the unbridled power and rage inside of her will cause her to do (basically, kill all non-mutants). She then destroys herself to save mankind.

X5 has the entire world mad at mutants and the X-Men, blaming them for the things Phoenix did. The government is considering legislation to aggressively go after mutants, while the evil mutant brotherhood returns - now led by Mystique - with a crazy plan to attack the Pentagon or something. Hello, Terminator-esque "Days of Future Past" saga - and a major role for Kitty Pride.

P.S. - I also would have killed the "X-Men Origins" Wolverine movie and instead based a solo Wolverine movie on the original Chris Claremont / Frank Miller miniseries. It had ninjas.
Posted by Rico Detroit at 6:00 AM