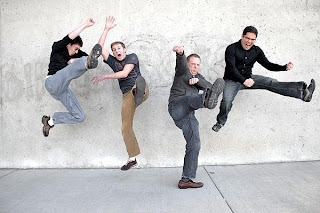 I saw a band called Note To Self at the Art Fair in Ann Arbor this year. Pretty good band. Also, I know a guy who knows a guy, and now I know those guys. Pretty good guys. (For the record, I drank Scotch with one of them this weekend. Pretty good Scotch.)

Anyway, these guys recently recorded a cover of Coldplay's 2000 hit "Yellow." Now Coldplay's version was absolutely brilliant - four and a half absolutely perfect minutes of music. It was one of my favorite songs of 2000, and is still a favorite. So I do not say this lightly...

Note To Self's version is better.

I know, I know, you're going to claim I'm not objective on this one. But I have played it for a few people now - without any discussion beforehand - and they have all had the same reaction. Listen and download the song here and you be the judge!

Note To Self takes the song in a looser, rougher direction than Coldplay. It has a demo feel to it, seeming at times like a jam session that could unravel at any moment, but that approach works remarkably well, opening up a warmth and intimacy unseen in the original. The earthy, bluesy interaction between acoustic and electric guitar gives it an Americana feel, while a strong, funky drum beat keeps the song buoyant and chugging along.

It is the voices, however, that provide the glue that holds it all together. The band's two singers take turns on lead vocals, with the other pitching in wonderful harmonies. Again, there is a distinctly DIY element to the singing, but that's not meant to imply rough edges. Note To Self's trademark sweetness is there in spades, combining an edgy, alternative rock feel with an underlying, exuberant joy. From the opening call ("One, two, three, here we go!"), my heart just leaps when I hear this recording.

The highlight comes with just under a minute remaining in the song, when someone yells "Everybody now!" in the background and additional voices join in, singing along and then clapping. It is exactly what I feel like doing as the listener! It is the musical equivalent of a group hug, and it sounds and feels incredible. A single voice emerges to sing a couple more lines as the clapping and crowd noises dissipate, and the song fades to a single, quiet drum beat.

P.S. - In case you're wondering: yes, it feels good to scoop Pitchfork.
Posted by Rico Detroit at 10:00 PM