Only cowboys and aliens? 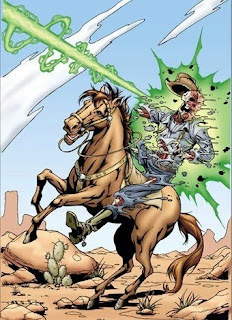 Yesterday, it was reported that director Jon Favreau and actor Robert Downey, Jr. will be teaming up to bring us a movie adaptation of a story called Cowboys & Aliens. This is the same team that brought us last year's Iron Man and is hard at work on Iron Man 2.


Also attached to the project are writers/producers Alex Kurtzman and Roberto Orci (2009's Star Trek reboot) and Damon Lindelof (executive producer of Lost).
Needless to say, while I have no idea what the story is, I'm super excited.

Pay attention, Hollywood. I'm still holding out hope for the greatest movie concept ever: Ninja Pirates vs. Alien Robot Zombies. (Work mutant dinosaurs into that and you don't even have to hire a writer...)
Posted by Rico Detroit at 6:00 PM