Octobeard! Will you accept the challenge? 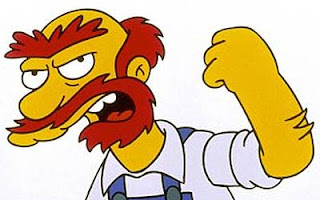 With October nearly here, I am issuing a challenge to every man among us. October is a man’s month if ever there was one: a month for men with a little hair on their chests and a little dirt under their fingernails. Still warm enough to barbecue, but cold enough to wear flannel while you do it. Time to bring in the harvest, fix up the house and go buy a hunting license. And there are more spectator sports than you can shake a beer can at: the World Series, NASCAR’s homestretch, compelling NFL and college football, and the beginning of the NBA and NHL seasons.

With all of that in mind, it’s time for the real men to stand up and show what they’re made of. It’s time to cowboy up and get back in touch with our primal roots. Let’s order our steaks rare. Let’s fix something with power tools.

And most importantly, let’s grow beards.

Yes, that’s right, it’s time for men to prove they’re men in the one indisputable way they can: by doing nothing and letting nature make the case for them.

It doesn’t take any particular skill to grow a beard – just a Y chromosome and the willingness to embrace your inner caveman.

As an added benefit, your face will thank you as the weather gets cooler. By the time you’re in that deer blind in mid-November, you’ll have a built-in scarf keeping you warm.

Personally, I plan to carve my beard into mutton chops at the end of October. Just think of the possibilities for Halloween: fat Elvis, Civil War general, Wolverine, you name it.

I have thrown down the gauntlet: are you man enough to accept the challenge? Grow a beard or watch October pass you by.

It’s just one month. One month to prove once and for all you’re a man. What have you got to lose?