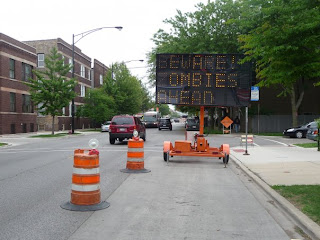 While the U.S. government sits idly by, other nations around the world are taking the threat of the inevitable zombie apocalypse seriously. Perhaps made nervous by the efforts of its neighbor to the south to weaponize zombies, officials in Canada have undertaken a serious, scientific study of how best to combat the coming undead menace.

The study has just been published in the new academic book Infectious Disease Modelling Research Progress by Nova Publishers. Here is an actual quote from chapter four:

An outbreak of zombies is likely to be disastrous,
unless extremely aggressive tactics are employed against the undead. It is imperative that zombies are dealt with quickly, or else we are all in a great deal of trouble.

The book cautions that we must be prepared. Growing from a single zombie, it would take only about three hours for the undead to outnumber the surviving humans in a city of 500,000. The authors conclude that "Only sufficiently frequent attacks, with increasing force" can save us all from "an outbreak of zombies [that] will result in the collapse of civilization, with every human infected, or dead."

Thank God the Canadian army is now hard at work preparing to meet that "doomsday scenario." All I can say is that when the zombie apocalypse comes, I'm swimming across the Detroit River into Windsor.

The full article can be found here.

Email ThisBlogThis!Share to TwitterShare to FacebookShare to Pinterest
Labels: zombies