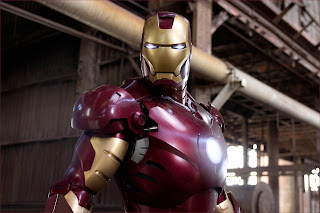 In my opinion, these are the best superhero movies (or movie series) to date:

This one had it all: action, humor, interesting characters and a fantastic story. Pixar's animated format proved perfect for bringing comic book action to (larger-than-)life. Sure, it was a ripoff of the Fantastic Four and dozens of other comic book sources. But it was a good ripoff. And it had tremendous heart. Make a sequel, please!

This movie perfectly straddled the line: it was fantastic enough to wow us, and down to earth enough for us to connect with it. Robert Downey, Jr. was a big part of the reason: his portrayal of Tony Stark/Iron Man showed amazing depth and a wicked sense of humor. The cool gadgets and effects didn't hurt either. [Update: Iron Man 2 (2010) is a worthy sequel.]

For this dark take on the Batman mythos, superhero conventions were thrown out of the window and we were left with an extremely gritty detective story and one very eccentric man's struggle to work around the very law he is trying to uphold. Heath Ledger's portrayal of the psychotic Joker in the second film was chilling.

While the superpowers in these movies bordered on the ridiculous, what made them a success was the underlying humanity of the story: people who are different trying to cope and fit in. Some of those people just happen to have metal claws or laser beam vision, and aren't afraid to use them when all else fails.

Tim Burton's take on Batman was at times campy, but two fantastic performances make it work. The first is Jack Nicholson, who puts a delightfully over-the-top spin on the Joker. Almost as good was Michael Keaton's minimalist, everyman Batman. (Note: if the sequel, Batman Returns, would have scrapped the Penguin part of the story and featured more of Michelle Pfeiffer's Catwoman, it could have been just as good.)

This is a very '80s movie and is full of the storytelling conventions and dated special effects of that decade, not to mention a heavy dose of biting satire. Underneath, though, there is a very human story, wonderfully captured by Peter Weller's straight portrayal of the title character. I'd buy that for a dollar!

While the villains are somewhat weak, Toby Maguire is well cast as the spider-bitten hero, and the stories are told well. Spiderman 3 was a noticeable drop off, but not a fatal one, and it's still possible that the best Spiderman movie is still to come.

An unusual premise, but it somehow works. The titular demonic being (played by Ron Perlman) turns out to be the most normal thing in the films, which are packed to the hilt with all manner of mutants, paranormal beings, mummified Nazis and magical special effects by director Guillermo del Toro.

This movie was largely overlooked when it was released, but it was the best screen adaptation yet of the familiar Hulk story. The movie skips the typical "origin story" (flashes of it are seen in the opening credits) and launches right into the action - which never stops.

The plot holes in these two movies are so big that they are almost unforgivable. (Seriously, if Superman were to reverse the rotation of the Earth it wouldn't reverse time, it would kill everyone on the planet.) Still, Christopher Reeve's portrayal of the most famous superhero of all cannot be topped.

This small-budget gem was director Sam Raimi's first picture, and it has become a cult classic. It had an intriguing story that captures the spirit of superheroes, while adding its own original twists.

Widely regarded as the greatest comic book in history, Watchmen was deemed "unfilmable." Zack Snyder proved them wrong, and while it doesn't work 100% of the time, there are plenty of compelling moments and dazzling imagery.

The flip side: worst superhero movies

I try not to watch bad movies, but I have seen a few really bad superhero ones. The worst was Ghost Rider

(2007): honestly, how can you mess up a movie featuring a burning-skull, motorcycle riding demonic hero?! The League Of Extraordinary Gentlemen

(2003) was the worst interpretation of the source material. X-Men: The Last Stand

(2006) was the worst case of jumping the shark (an even greater plummet than the original Superman and Batman movie franchises). The Daredevil

) movies were also huge disappointments, given how much good storytelling potential they had.
Posted by Rico Detroit at 6:00 PM