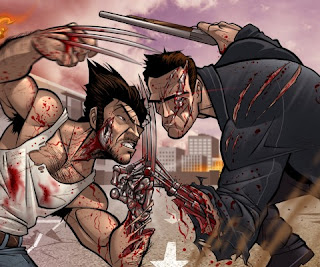 I should be working, but as Mark Twain said, "Never put off until tomorrow what you can do the day after tomorrow." So instead, I'm going to reflect on the two movies I saw this week: X-Men Origins: Wolverine and Terminator Salvation. (SPOILERS!)

First of all, I give both movies *** three stars ("worthwhile"). They were both fairly entertaining action movies, but without much depth. That surprised me, as I had expected Wolverine to be a two-star movie and Terminator to be a four-star one. Here are some more thoughts:


Terminator Salvation
Photo: http://www.sidekickcomicsuk.com/blogs/blog4.php/2009/09/13/something-silly-for-sunday-35-wolverine-
Posted by Rico Detroit at 6:00 AM