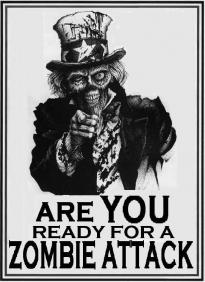 In yet another sign of the coming zombie apocalypse, the United States Department of Agriculture has authorized the introduction of a non-native species of parasitic flies into Texas. The phorid flies, originally from Africa, "dive bomb" their victims and lay eggs inside of them. When the eggs hatch, the maggots eat away at the victims' brains, causing them to exhibit "zombie-like behavior."

This stage may last for two weeks, during which time the zombies wander aimlessly. (I imagine this is the stage where they attack violently in search of brains, although the news stories do not specifically mention at what stage these attacks occur.) It finally ends when the victims' heads fall off and the adult phorid flies emerge to begin their cruel cycle of life and undeath all over again.

The flies have migrated throughout Central and South Texas and have now reached the Oklahoma border. As insane as it may seem, "academics" from the University of Texas, with the blessing of the federal government, are actually planning to introduce more of the flies this year to increase zombie production! The story goes on to say:

Draw what conclusions you will about the mental state of those "farmers" and "ranchers"!

As horrifying as this sounds, I swear that I am not making it up. I only skimmed to bring you the most pertinent details, but the full story can be found here.

P.S. - I also recommend this prophetic article (NSFW) titled "5 Scientific Reasons a Zombie Apocalypse Could Actually Happen." The phorid flies, by the way, fall into the very first category listed: "brain parasites." The other four possibilities are: neurotoxins, rage virus, neurogenesis and nanobots. I read this article a little more carefully than the other one, because it provided a lot more details. I was especially frightened by the part where it said that "science has proven" with certainty that one of these five things will eventually "end civilization by flooding the planet with the cannabalistic [sic] undead." Spelling error aside, that is pretty scary stuff!


Despite initial concerns, farmers and ranchers have been willing to let researchers use their property to establish colonies.

Email ThisBlogThis!Share to TwitterShare to FacebookShare to Pinterest
Labels: zombies