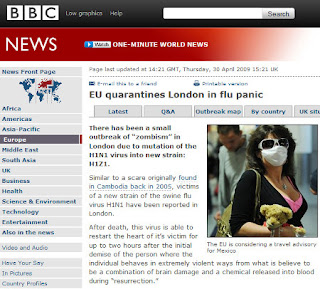 According to a report out today by the BBC, the H1N1 virus, also known as the swine flu, has now evolved into a new strain known as H1Z1. The new, more potent, more difficult to control strain is being referred to as the zombie swine flu, for reasons which will become obvious when you follow the link to the article.

That's it, I don't have anything else to say; just follow the link.

And panic. Yes, if you have not already succumbed to the apocalyptic cage rattling of the 24-hour news channels, now is the time to start.

UPDATE: The link no longer seems to work, so I have added the full text of the article below...

There has been a small outbreak of “zombism” in London due to mutation of the H1N1 virus into new strain: H1Z1.

Similar to a scare originally found in Cambodia back in 2005, victims of a new strain of the swine flu virus H1N1 have been reported in London.

After death, this virus is able to restart the heart of it’s victim for up to two hours after the initial demise of the person where the individual behaves in extremely violent ways from what is believe to be a combination of brain damage and a chemical released into blood during “resurrection.”

The World Health Organization (WHO) has raised the alert to phase six, its highest level, and advised governments to activate pandemic contingency plans.

In Mexico, the epicentre of the outbreak, President Felipe Calderon urged people to stay at home over the next five days.

There are many cases elsewhere - including the US, Canada, Latin America, Europe, Israel, and New Zealand.

BBC health correspondent Mark McGrith says the raising of the WHO alert on Wednesday suggests a global epidemic, or pandemic, is imminent.

In the latest developments:

The Netherlands confirms its first case of zombie swine flu, in a three-year-old boy recently returned from Mexico. After passing away early this morning, he rose from the dead and lunged at his mother.

Ghana has become the latest country to ban pork imports as a precaution against swine flu, though no cases have been found in the West African country

China's health minister says that the country's scientists have developed a "sensitive and fast" test for spotting swine flu in conjunction with US scientists and the WHO. The country has recorded no incidence of the flu yet. There methods, however, have been uneffective in spotting the H1Z1 strain.

At the meeting of health ministers in Luxembourg, a French proposal for a continent-wide travel advisory for Mexico will be discussed.

It is unclear whether the EU executive has the power to impose a travel ban.

Several countries have restricted travel to Mexico and many tour operators have cancelled holidays.

Other members are resisting calls to implement travel bans or close borders, on the grounds - backed by the WHO - that there is little evidence of their efficacy.

The EU ministers will also try to agree on how to refer to the new virus.

The European Commission has been calling it "novel flu", replacing the word "swine" to avoid prompting a fall in demand for pork and bacon.

On Wednesday, Egypt began a mass slaughter of its pigs - even though the WHO says the virus was now being transmitted from human to human.

SYMPTOMS - WHAT TO DO

If you have flu symptoms and recently visited affected areas of Mexico, you should seek medical advice

If you suspect you are infected, you should stay at home and take advice by telephone initially, in order to minimise the risk of infection

If you feel yourself passing away, then notice your strength and vigor returning at an alarming rate, please attempt to restrain yourself to prevent infection and harm to others.

Have you been affected by the zombie strain of swine flu? You can send your experiences using the form below. You can also send your questions about the decision to raise the alert and we will send it to our health experts.
Posted by Rico Detroit at 11:07 PM