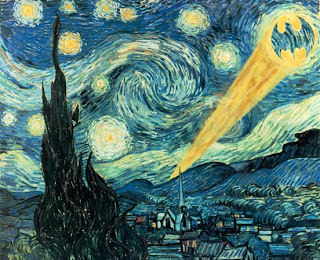 There is an animated series called Batman: The Brave And The Bold that just started its second season on Cartoon Network last night. If you have not yet seen this show, check it out: it will surprise you.

I certainly was not expecting much when I sat down to watch with my six year old son, but... Wow. This is the most fun I have had watching a "kid" show since I was a kid myself. The creators have found something magical here: just the right blend of action and whimsy. The writing is top notch, the characters larger than life, and the stories fresh and entertaining.

The portrayal of Batman in popular culture has evolved greatly over the years, going from the absolutely camp of the 1966-'68 Adam West TV series, to the dark fun house of 1989's Tim Burton version, and finally to Christopher Nolan's grim, gritty vision in 2008's The Dark Knight.

The latter movie paints the Batman myth in the most realistic terms possible for a "superhero": he is a regular man in extraordinary circumstances, a conflicted and vulnerable hero whose actions have unforeseen consequences, and who finds himself at odds with the very legal system he is trying so hard to defend. It is a gripping story, but intense and intensely gloomy.

Fortunately, the Batman character is big enough for multiple interpretations, and Batman: The Brave And The Bold approaches the character from a delightfully different angle. While it is not as campy as the Adam West version of the '60s, the new animated series makes no attempt at realism, injecting humor and fantasy at every turn.

There are some occasional absurd or silly moments, but they are handled fluidly, never as cheap gags or cheats to jump over plot holes. In the most recent episode, the Batmobile changed Transformer-style into a robot so that Batman could fight an evil robot. In another episode, Batman used an "ancient meditation technique" to project his spirit out of his trapped body so it could go find help. These moments are absolutely ridiculous, yes, but so entertaining and so in keeping with the light-hearted, fast-paced rhythm of the show that they never induce an alien robot zombies reaction.

Each show is divided into two sections, which are usually unrelated. A short, opening sequence before the credits provides an opportunity for random action scenes - candy for the brain that can be appreciated without much need for plot. The rest of the episode then presents a longer adventure that allows a more complex story to be told. Both sections pair Batman with one or more other superheroes. And happily, the episodes feature mostly obscure or under appreciated heroes and villains. I have not spotted Superman yet, and Batman has fought villains like Gentleman Ghost and the Brain rather than his normal rogue's gallery of the Joker, Penguin and Catwoman.

My favorite character so far, however, has been Aquaman, who is portrayed here as a bearded, jovial, heroic megalomaniac. He is simultaneously a parody of the character and its first compelling portrayal ever. One can only hope for a spin off.

My rating: **** four stars (recommended) for both kids and kids at heart alike. This is an intelligently written and exciting show, and surprisingly one of the best things on TV right now. You can catch it on Cartoon Network every Friday night at 8:30 PM Eastern & Pacific Time, with repeated showings throughout the week. It is rated TV-Y7 for "fantasy violence."
Posted by Rico Detroit at 8:00 PM