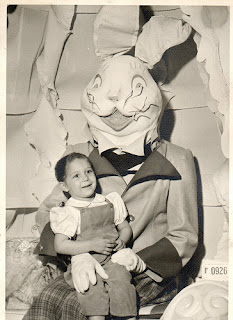 Occasionally you run across an adult who doesn't believe in Santa Claus, which of course is just foolish. Santa's existence is well-documented by forensic scientists, and there are several new sightings by credible sources every Christmas Eve. The North American Aerospace Defense Command (NORAD) is even able to track his movements globally with the aid of a sophisticated, multi-billion dollar tracking system built specifically for that purpose. Santa is elusive to be sure, but the evidence is there.

In the 1950s and '60s, teenagers in the U.S., and later in Great Britain and elsewhere, began spreading rumors that Santa was a hoax. Why these allegations were able to gain traction is beyond me, although it should be noted that smoking was also popular among teens during this time, so apparently they were willing to believe anything. That the rumors persist to this day speaks to the deep, underlying cynicism in our society - no doubt attributable to those adults who were naughty enough as children to never enjoy the magic of getting presents from St. Nick to begin with. And of course, the role of the major toy companies in perpetuating these rumors cannot be discounted, for while Santa is now heavily invested in them - and indeed directly manufactures many of their toys at his North Pole, South Pole and China facilities - there was a time not so long ago (the Great Toy Recession of 1972) when that relationship was severely strained.

Despite all of the persistent nonsense about Santa, however, surprisingly little attention has been given to the Easter Bunny, and it is here where all evidence suggests an actual hoax has been perpetrated. Besides the flat-out preposterousness of the notion of a giant, intelligent rabbit, there are simply no credible witnesses to this animal's existence. All we have are a few grainy, Bigfoot-style photos that are obviously nothing more than a man in a bunny suit.

The only half-credible account supporting the Easter Bunny's existence was a 1917 sighting by noted zoologist Willard Fillmore, great grandson of U.S. President Millard Fillmore and winner of the 1919 Nobel Prize in biology for his dissertation on the healing properties of Colorado river toad venom (since discredited). Mr. Fillmore's account produced no photograph. However, he did recount a vivid description of what he saw: "Silhouetted there in my parlour stood a creature fantastic... Not four feet tall it reached, and from its head sprouted two enormous ears like those of an English Lop rabbit... It made not a sound, and when I lit the lamp, it had vanished. Where it had stood, a woven basket remained, filled with marshmallow, chocolate, rum and all manner of sweet treats, laid upon a bed of fresh cut grass..."

From Fillmore's simple description of the phenomenon, the public's imagination was soon engaged and in no time there were Easter Bunny decorations, cards, books and chocolate candies everywhere. (Note to those interested in starting a hoax: feed people sweets in the process, and they will not question even the most far-fetched notions!)

But now that scientists are starting to study the Easter Bunny in earnest, the story behind the fabled hare is beginning to unravel. The National Center for Forensic Research recently issued an exhaustive report of 50 years of research on the subject. To summarize the findings, the NCFR found absolutely no physical evidence of a giant bunny. However, they did uncover several details that point toward a different conclusion. While there were no rabbit tracks, they did find at many sites an extra set of child-sized footprints that could not be matched to the children that lived there, or to any of their known accomplices. Likewise, while there was no trace of rabbit fur or DNA, they did frequently uncover microscopic traces of a completely unexpected substance: felt. The NCFR hesitated to draw any firm conclusions from the evidence, but they did not have to: combined with the other known facts in this case, the evidence speaks for itself.

There is only one organization with the experience, motivation and infrastructure needed to pull off a massive global giveaway program like this: Santa Corp. I do not think the distribution is handled by Mr. Kringle himself, mind you, but this is a smaller-scale operation than Christmas and could very easily be handled by one or more of his senior elves. As for Mr. Fillmore's recollection of seeing bunny ears in silhouette, this is easily explained. While most elf hats end in a single point, dual-pointed "jester" style elf hats are not unheard of. Furthermore, it has long been rumored that these hats are part of the traditional garb of - you guessed it - Santa's candy makers.

Whether the reveal to Mr. Fillmore was intentional or not, it seems to have worked out in the elves' favor by completely throwing the media off the trail. And that is probably a good thing, as even today the Easter disbursement is much more inconsistent than Christmas: sometimes involving candy, sometimes toys; sometimes hiding the basket, sometimes not; sometimes filling the basket with real grass, sometimes artificial grass or another substance; and so on. (Some of this inconsistency might be based upon Santa's use of multiple elves to distribute the baskets.)

In the long run, I suppose it does not matter to children whether the candy and toys come from a giant, magical rabbit or an elite team of ninja-like elves. The fact that there is magic in the air is generally enough for them, and there is no time for deeper questions when one is stuffing one's face with marshmallow.

Scientists like me, however, are driven to know the truth, and our innate curiosity will continue to drive our studies, jelly bean by jelly bean, until the full nature of this conspiracy is revealed.
Posted by Rico Detroit at 3:00 PM